Greenland’s massive ice sheet has experienced such an early and extensive melt that scientists this week thought their models were broken when they saw the data.

“We had to check that our models were still working properly,” climate scientist Peter Langen told DMI’s Polar Portal website.

Such a melt is normal for late May, but not mid-April.

“Something like this wipes out all kinds of records, you can’t help but go, ‘This could be a sign of things we’re going to see more often in the future,'” Langen said.

A weather system is bringing warm temperatures to Greenland and funnelling lots of warmer-than-normal rain up from the south.

Scientists said that this is part of a natural weather system, but man-made climate change has worsened it.

Greenland’s ice sheet melting is one of the more visible and key signs of man-made global warming from the burning of fossil fuels because it is causing seas to rise, and putting coastal areas at risk, Meier said.

If the entire Greenland ice sheet melted, which would take centuries, it could add six metres or more to the global sea level, Meier added.

But within the next century, Greenland ice melt alone could raise it by a metre or so, he said. “The concern is things are moving faster than we thought,” Meier said. 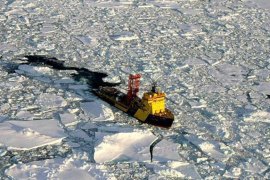