Indian authorities have imposed a curfew in parts of Kashmir to stop fresh demonstrations following the killings of four people by Indian troops.

The latest death occurred on Wednesday when a man was hit on his head by a tear gas shell fired by security forces in the northern village of Drugmulla in Indian-administered Kashmir, police said.

He was part of hundreds of rock-throwing protesters who clashed with government forces for a second day as authorities enforced a curfew in Srinagar, Handwara, and neighbouring villages.

“We imposed restrictions in the old town of Srinagar and in Handwara to prevent violence,” director general of police, K Rajendra, told the AFP news agency.

A resident from Handwara told Al Jazeera that clashes continued throughout the day even though shops and schools were closed and streets deserted because of a security lockdown.

A nurse at the local hospital in the government sub-district hospital in Langate told Al Jazeera on condition of anonymity that about 20 people had been brought in for treatment for tear gas and gunshot wounds.

Mehbooba Mufti, who recently took over as the Chief Minister of Jammu and Kashmir state, said the killings would have a “negative impact” on her government’s peace efforts in the region.

Police said a 70-year-old woman, who was hit by gunfire and was among a dozen injured during clashes between residents and government forces on Tuesday, died in hospital on Wednesday. Two others also died from army gunfire.

The protest and clashes in the northern town of Handwara erupted on Tuesday following an allegation by residents that an Indian army soldier had tried to sexually assault a teenage schoolgirl.

The police said preliminary reports indicated there was no such incident of molestation and that it may have been an attempt by locals to create trouble.

Rage in Kashmir over killing of youths by Indian army

Indian military, police and government officials, wary of the killings escalating the conflict in the volatile region, ordered investigations.

“The incident will be investigated and anybody found guilty will be severely dealt with,” Indian army commander General D S Hooda said in a statement.

Rights groups, however, say such investigations rarely yield any concrete results and are often aimed at calming public anger.

Police Inspector General Syed Javaid Mujtaba Gillani said the soldiers fired at protesters when they tried to torch their bunker.

Shortly after the woman’s burial, clashes broke out as villagers defied the curfew and hurled rocks at government forces, who responded by firing tear gas.

“She was working in her orchard 4km away from the protest site. The soldiers came and shot her. It’s a plain murder,” said villager Ghulam Mohammed Shah.

Later on Wednesday, hundreds joined the funeral of two young men and shouted “Go India, go back” and “We want freedom.”

Meanwhile, the separatist groups challenging India’s sovereignty over Kashmir called for a general strike on Thursday and anti-India protests on Friday.

Anti-India sentiment runs deep among the population of Kashmir, and human rights groups have long accused the Indian military of using rape and sexual molestation to intimidate the local population.

Kashmir has been split between Indian and Pakistani control since the British colonialists left in 1947, but is claimed in full by both countries.

Hundreds of thousands of Indian troops are deployed in the region, making it one of the world’s most militarised zones. They enjoy immunity from prosecution in civilian courts unless specifically permitted by New Delhi. 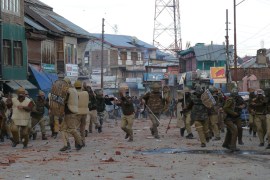 Rage in Kashmir over killing of youths by Indian army 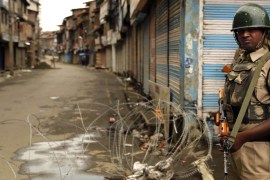 At least six civilians killed on the Indian side, while two others died in the Pakistani side as shelling continues.