A growing number of children whose families have fled the Syrian war to Lebanon are being forced to work for little or no pay, many of them in dangerous conditions, anti-slavery experts said on Tuesday.

About one million Syrians have fled to Lebanon, where they make up a quarter of the country’s population. Many have no legal right to work, and families are forced to find other ways to pay for food, shelter and healthcare.

Some Lebanese employers prefer to hire children, finding them cheaper and more obedient than adults, the Freedom Fund, an international initiative to fight slavery, said in a report.

Adults, too, are being used as forced labour and are vulnerable to sexual exploitation, according to the report, which was based on interviews with local officials, refugees, international agencies and local NGOs.

“Our findings indicate that (forced labour) is becoming increasingly common as refugees become more desperate. According to two interviewees, forced labour is now so widespread as to constitute ‘the norm’,” the report said.

One NGO interviewed for the report estimated that between 60 and 70 percent of refugee children work.

Many have to work for little or no money as a condition for living in informal tented settlements. The coordinator of a tented camp – called the “shawish” – will line up work for children, often in the fields of the farmer hosting the camp.

“It is almost impossible for parents to refuse this request,” the report said.

The “shawish” may also hire out children to nearby farmers, restaurants, auto repair shops or other employers. They have been known to force children to work in towns and cities, according to the Freedom Fund.

Almost all refugee children in the country’s eastern Bekaa Valley, near the border with Syria, are working in the fields there, many exposed to dangerous pesticides and fertilisers, the report said.

In towns and cities, they work on the streets, begging, selling flowers or tissues, shining shoes or cleaning car windscreens.

READ MORE: #BuyPens refugee: ‘I want to help other Syrians’

In 2013, Lebanon launched a national action plan to eliminate the worst forms of child labour, including among Syrian refugees, by 2016.

Many organisations there are providing support to Syrian refugees, but efforts to curb slavery and human trafficking are often uncoordinated, limited in their focus and do not always target those most at risk, the Freedom Fund said.

“Without significant and determined intervention, the situation will only worsen for many hundreds of thousands of refugees at risk of extreme exploitation,” the group’s CEO, Nick Grono, said. 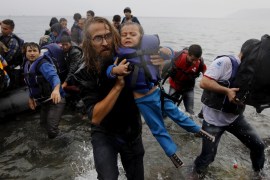 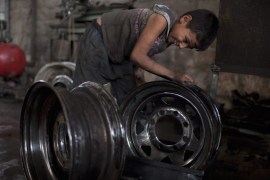