Washington DC – Police in Washington DC have arrested dozens of protesters who were staging a sit-in outside the US Congress meant to raise awareness about corporate influence in American politics.

The day began with a rally of about 500 people in US capital as part of a series of actions around “Democracy Spring”, a reference to the Arab Spring protests of 2011 that upended the Egyptian government and saw similar anti-government protests across North Africa and the Middle East.

“Right now, we have a campaign finance system that is dominated by money,” Kaja Rebane, 38, a Wisconsin graduate student, dressed as the Statue of Liberty, told Al Jazeera.

“It makes it very hard for regular Americans to be heard.”

Many, like Rebane, cited the 2010 US Supreme Court decision on campaign financing, popularly referred to as “Citizens United”.

That decision recognised that corporations and unions could spend unlimited cash indirectly on campaigns and has since led to an unprecedented amount of money in US elections. Some analysts believe upwards of $5bn could be spent during the 2016 US election.

Ray Lewis, a retired Philadelphia police captain, who was arrested in New York City during the Occupy Wall Street protests in 2011, agreed with many people in attendance that the US Congress is largely to blame for what he believes is a corrupt political system.

“I am trying to bring this message of democracy to mainstream, white America,” said Lewis, a white man, wearing his police uniform.

“Minorities know the truth. White America does not. They’re living in this dream world.”

Police lined the steps of the main US Capitol building as protesters approached. Officers warned of arrests, asking those who did not want to be detained to step outside a security perimeter.

About 200 people refused to leave. At press time, US Capitol police did not have an official number of arrests. 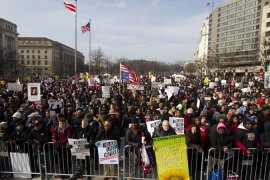 Thousands march against US police killings

Demonstrators gather in Washington and New York to rally against the killings of unarmed black men by police officers. 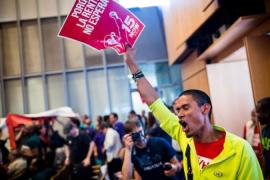 The new left-right alliance in the US