Eight Iraqi soldiers were killed on Thursday after an ISIL suicide car bomber detonated near an army convoy advancing towards the town of Heet during an operation to oust the armed group, military sources told Al Jazeera.

Iraqi special forces – backed by army troops and US-led coalition air strikes – moved on the town in western Anbar province that has been for months under the control of Islamic State of Iraq and the Levant (also known as ISIS).

Retaking Heet – strategically located on the Euphrates River near the Ain al-Asad air base, where several hundred US forces are training Iraqi troops – would push ISIL further west towards the Syrian border, cutting a connection to the northern town of Samarra while leaving Fallujah as the group’s only stronghold near the capital, Baghdad.

A senior officer from the special forces – the elite US-trained units that led the recapture of the key nearby city of Ramadi three months ago – told Reuters news agency his troops were 1km from the town centre, about 130km west of Baghdad.

Another officer, on a frontline less than 3km from Heet, said the operation had begun early on Thursday and was progressing swiftly.

“There are some IEDs [improvised explosive devices] along the movement, but it’s still good to go and we are moving,” he said by phone.

Both officers spoke on condition of anonymity, as is military policy.

In a separate attack, military sources told Al Jazeera at least seven Iraqi soldiers were killed and 14 others wounded in an ISIL assault on military units protecting the al-Habbaniyah air base, northeast of Ramadi.

READ MORE: Fallujah crisis – ‘We are being left to slow death’

Baghdad has had success in pushing back ISIL fighters in recent months, and has pledged to retake the northern city of Mosul later this year, but progress has often been fitful.

In a statement announcing the Heet advance, the military called on civilians – thought to number in the tens of thousands – to move away from ISIL positions: “Those targets will be destroyed.”

The armed group has regularly used civilians as human shields – a tactic aimed at slowing the movement of Iraqi forces and complicating air strikes essential to ground operations. 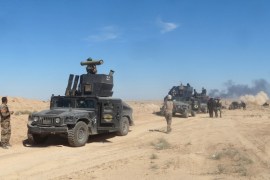