Grande-Synthe, France – Hundreds of people have been moving into a new refugee camp in the northern French city of Dunkirk amid increasing tensions between local authorities in the area and the state.

The camp in the Grande-Synthe suburb of the city opened on Monday as part of a joint project between Doctors Without Borders (MSF) and the local Green-run authority.

The site, which has room for 2,500 refugees, is a few kilometres away from the Grande-Synthe “jungle” site infamous for its terrible living conditions, considered worse than those in neighbouring Calais.

As politicians continue to debate how to deal with Europe’s refugee crisis, the north of France struggles to cope with a surging number of refugees and migrants trying to cross the English Channel to reach the UK.

In a statement sent to Al Jazeera, MSF’s Executive Director, Vickie Hawkins said the new camp would protect refugees from cold weather, flooding and provide adequate sanitation facilities, but was not a permanent solution.

“The new camp will bring conditions up to minimum humanitarian standards, but we know that this is just a short-term solution,” Hawkins said.

“Governments on both sides of the Channel need to reach an agreement to find a long-term solution for these people.” 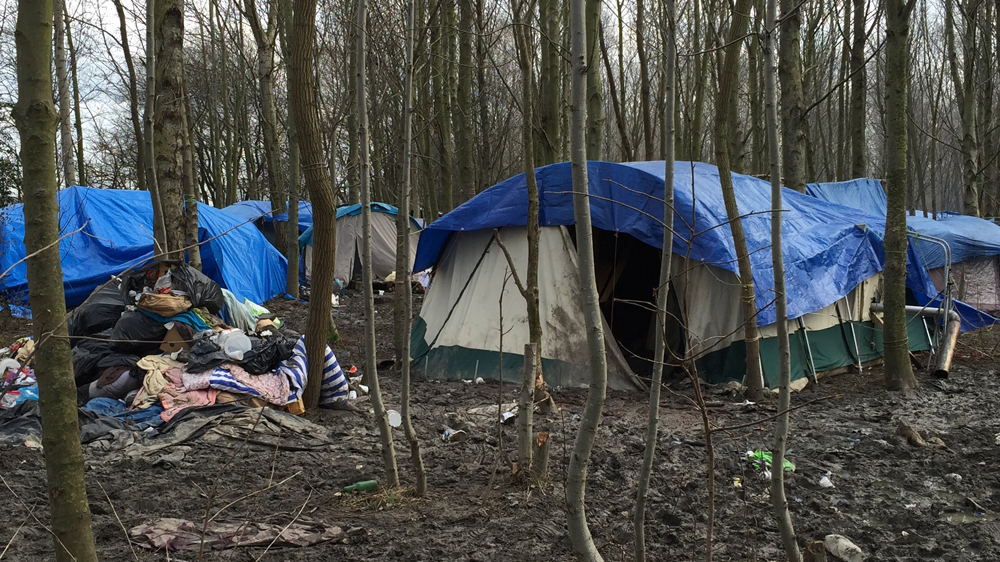 Amir, a Kurd who fled the Iraqi city of Mosul after its takeover by the Islamic State of Iraq and the Levant (ISIL) group, said he still intended to reach the UK.

“We were sleeping in thick mud, we were ill, so of course this is better… but I don’t know how long I will stay here.”

IN PICTURES: Inside the Calais Jungle

The concern was shared by other refugees, who are grateful for the relative comforts of the new camp but weary of the sense of permanence living there might bring.

Some refugees said camp organisers had told them they could expect to live in the camp for up to a year.

The refugees Al Jazeera spoke to said they wanted to make their way to the UK sooner.

A constant reminder of that aim is the stream of trucks on the adjacent A16 motorway heading to the Calais ferry terminal and later England.

Sneaking onto the vehicles has become one of the primary methods of getting into the country – one that has proven deadly on a number of occasions.

Zoro, who said he fled Iran for its persecution of Sunni Muslims and Kurds, told Al Jazeera reaching the UK would put him beyond the reach of Iranian authorities.

“If I get deported to Iran, they will execute me… I support the Kurdish groups,” he said, gesturing to the trucks on the motorway when asked how he intended to get there.

Grande-Synthe’s Mayor Damien Careme of the Green party has been unrepentant of his efforts to build better conditions for Dunkirk’s refugees – a position that has put him at odds with the French state.

Together with MSF, his local authority helped fund the nearly $3m cost of developing the camp, with no contribution from the central French government.

A spokesman for the Greens told Al Jazeera the government tried to halt the opening of the camp on health and safety grounds.

“This camp was born as the result of the political will of Damien and that of local organisations… it’s thanks to these actors that the camp was built,” said Stephanie Bocquet.

“The state didn’t forbid its construction because it was not financially contributing to it.

“Damien has said the power struggle [with the government] will continue and I don’t think this pressure is going to stop him or stop MSF.”

Refugees are expected to continue moving into the new camp throughout the week.