Four Palestinians have been shot dead in separate incidents after allegedly trying to kill Israelis in occupied East Jerusalem and Tel Aviv.

On the Mediterranean coast, an American tourist was stabbed to death and at least nine other people wounded by a Palestinian armed with a knife in the popular Jaffa port area of Tel Aviv on Tuesday.

Tel Aviv Mayor Ron Huldai told Army Radio that the attacker “indiscriminately stabbed people” before a police officer caught up with him and shot him dead.

The US state department strongly condemned the attack and identified the slain American as Taylor Allen Force.

“As we have said many times, there is absolutely no justification for terrorism. We continue to encourage all parties to take affirmative steps to reduce tensions and restore calm,” it said in a statement.

US Vice President Joe Biden arrived in Israel late on Tuesday for a two-day visit, and was meeting former Israeli president Shimon Peres in Jaffa around the time of the stabbings.

Earlier in the day, a Palestinian woman aged around 50 was shot dead after she drew a knife from her bag and tried to stab Israeli border policemen patrolling in the Old City of Jerusalem, according to police.

The Palestinian Ma’an news agency quoted a witness saying that Israeli officers shot her several times in al-Wad street, where “she was left bleeding” as the officers prevented locals and paramedics from accessing her.

Another witness said they saw Israeli forces shoot her from point blank range.

The policemen were not injured, spokeswoman Luba Samri said. She said the officers opened fire because they were in “immediate and real danger”.

The man opened fire on a group of police officers on Salah El Deen Street, near Herod’s Gate in occupied East Jerusalem, and wounded one, police said. He then fled and wounded another police officer before being killed.

A fourth Palestinian was killed after allegedly trying to stab an Israeli in Petah Tikva near Tel Aviv, Israeli police said.

US ‘committed to Israel’s security’

Biden is due to meet separately with Israeli Prime Minister Benjamin Netanyahu and Palestinian President Mahmoud Abbas on Wednesday.

When meeting Peres on Tuesday, he spoke of an “unvarnished, complete commitment to the security of Israel. And I hope we will make some progress.”

The White House has said Biden will not be pursuing any major new peace initiatives during his visit despite the wave of violence.

Before the latest attacks, the death toll in a wave of attacks since October 1 stood at 183 Palestinians, 28 Israelis, an American, a Sudanese and an Eritrean.

Others were bystanders to alleged attacks or shot dead by Israeli forces during clashes or demonstrations. 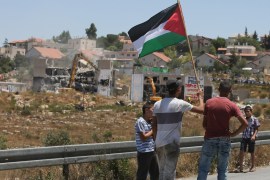 Damages sought from Sheldon Adelson and others for financing construction of settlements on Palestinian soil. 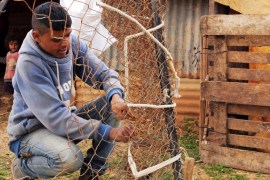 February saw the highest number of home demolitions for West Bank Palestinians since the UN began recording in 2009.