At least 10 people have been killed in clashes between rival armed groups in Central African Republic, police said.

The violence in the eastern town of Bambari appeared to be “in reprisal” for the murder of two young Muslims by unidentified assailants on March 2, a police spokeswoman said on Monday.

“We currently have a tally of 10 dead, including the two young Muslims whose death prompted the violence,” the spokeswoman said, adding that “a majority” of the victims were civilians.

Observers had hoped President Faustin-Archange Touadera’s accession to power on February 20 would close a three-year spiral of violence between rival groups that has left thousands dead and displaced more than 400,000 people.

The Mining town Bambari is a stronghold of mainly Muslim former Seleka rebels.

The city was the site of numerous inter-ethnic confrontations which left hundreds dead across 2014 and 2015 and forced thousands to flee.

But the violence receded under a transitional government supported by international peacekeepers, notably deployed by former colonial power France, and the United Nations.

Touadera, a former prime minister during the 10-year reign of former President Francois Bozize, whose  was deposed in 2013 triggering the unrest, takes over a country rich in natural resources but mired in biting poverty as it seeks to rise above ethnic strife.

On Monday, the UN released a report warning that the ongoing conflict in the Central African Republic continued to have a devastating impact on children.

“I am deeply troubled by the scale and nature of violations endured by children in the Central African Republic,” UN Secretary-General Ban Ki-moon said in his latest report on children and armed conflict in CAR.

The UN documented the killing of 333 children and maiming of 589 others in attacks targeting communities for reprisals between January 2011 and December 2015.

The majority of these attacks were documented between 2013 and 2014, after the government takeover by the Seleka and the rise of anti-Balaka militias.

The surge in violations included large-scale recruitment and use of children and the targeting of children based on their religious affiliations. 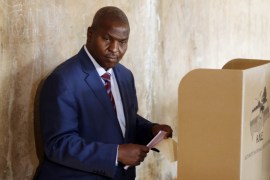 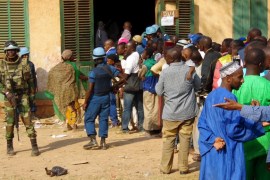 No candidate received more than 50 percent of the vote, officials say, as two former prime ministers prepare for runoff.