The military operation to retake Iraq’s second-largest city from ISIL is months away, or longer, military officials say, despite repeated claims by its prime minister that the armed group will be ousted from Mosul by year’s end.

Iraqi and US-led coalition officials estimate eight to 12 brigades, or an estimated 24,000 to 36,000 troops, will be needed to push the Islamic State of Iraq and the Levant group out of the city.

So far, 2,000 to 3,000 Iraqi troops have been deployed at Makhmour base, the likely staging ground for a Mosul assault, located 67km southeast of the city.

“We are all trained, qualified and ready for battle, but this force is not enough to retake Mosul,” Iraqi Lieutenant Colonel Mohammed al-Wagaa, stationed at Makhmour, told The Associated Press. “The battle for Mosul is going to take a long time.”

Prime Minister Haider al-Abadi has repeatedly vowed that ISIL’s biggest stronghold in the country will be recaptured this year.

But ISIL fighters are launching a diversion campaign of bloody suicide attacks in Baghdad and elsewhere. Their aim is to force Iraq’s already overburdened security forces to spread even thinner to protect the capital and other cities, rather than prepare the Mosul operation.

Iraq’s answer to that has been to plan to build a wall around the capital. Meanwhile, security forces are struggling to protect pockets of territory that have been recaptured.

American Army Colonel Christopher Garver, a spokesman for the coalition, put it more bluntly. “The forces that are going to conduct that assault into the city, they’re not in place yet,” he said.

The northern city of Mosul, once home to more than a million people, was the biggest prize captured by ISIL when it swept over much of Iraq’s north and west in the summer of 2014 and declared a “caliphate” across those lands and the ones it captured in Syria.

While Iraqi forces have clawed back some territory in the past year, retaking Mosul is considered crucial for breaking ISIL’s back in the country. Estimates of the number of fighters in Mosul vary from a few thousand to “not more than 10,000”, according to the coalition.

The US-led coalition began a training programme in December 2014, but so far only 18,500 soldiers and security forces have been trained in courses, which last about seven weeks. Analysts question whether such a crash course is adequate preparation.

Under political pressure to show victory, Abadi has repeatedly vowed to “liberate” Mosul this year. But US Lieutenant General Vincent Stewart, head of the Defense Intelligence Agency, told Congress last month, “I’m not as optimistic.”

Stewart said they may be able to begin “isolation operations” around the city, but “securing or taking Mosul is an extensive operation and not something I see in the next year or so”.

Iraq’s most  battle-tested military units are scattered, helping hold various front lines against ISIL in the country’s central and western provinces, or tied down controlling retaken cities and towns.

In Ramadi, capital of western Anbar province, a counterterrorism commander said his unit has to remain there because local police forces can’t maintain control. He spoke on condition of anonymity because he’s not authorised to talk to the press.

“You can’t just pick up and leave,” Garver said. Without proper forces in place, “Daesh comes back in and seizes terrain that you just spent months taking from them,” he said, using an alternative Arabic name for ISIL.

The armed group has stepped up insurgent-style attacks on Baghdad and other areas removed from front-line fighting. Over the past week a double bombing at a market in Baghdad’s Sadr city killed more than 70.

The following day a suicide attack at a funeral north of Baghdad killed about 30 people.

The attacks likely aim at delaying deployment of troops to Makhmour or along the Euphrates River valley for the Mosul assault by forcing the military to move its best forces to protect the capital, said Patrick Martin, an Iraq analyst at the Washington-based Institute for the Study of War.

So far the attacks haven’t slowed deployments north. But “if it becomes really bad and multiple attacks like these happen in the near future, [the military’s] calculus will probably have to shift”, Martin said.

Last month security officials announced work had begun on a 280km “wall” around Baghdad that would reduce attacks inside the city. The Interior Ministry said it would be a combination of tightened checkpoints, trenches, and blast walls completely surrounding the Iraqi capital.

The military must also clear ISIL fighters from more than 100km of territory to ensure reliable supply lines between Makhmour and Baghdad, said a Baghdad-based military commander overseeing preparations for the Mosul offensive. He spoke on condition of anonymity as he was not authorised to brief the press.

Politics have also complicated planning efforts, as Shia militias demand that they participate.

“No one has the right to prevent us from participating in the liberation of the city of Mosul,” Abu Mahdi al-Mohandes, the head of the government-sanctioned Popular Mobilization Forces (PMF), mostly made up of Shia militia, said at a Thursday press conference.

Shia fighters – some of the most effective ground forces against ISIL – led the fight to retake the mainly Sunni city of Tikrit – and were accused of human rights violations in the process. 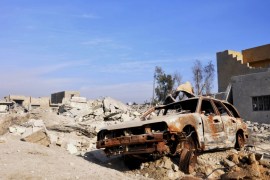 Fighters kill security forces on edge of Anbar’s provincial capital, just days after they were driven out of its centre.