A regional governor has called on the Greek government to declare a state of emergency for the area surrounding the Idomeni border crossing where thousands of refugees are stranded due to border restrictions along the route towards Western Europe.

About 13,000-14,000 people are trapped in Idomeni, while another 6,000-7,000 are being housed in refugee camps around the region, according to Apostolos Tzitzikostas, governor of Central Macedonia province.

“It’s a huge humanitarian crisis. I have asked the government to declare the area in a state of emergency,” Tzitzikostas said during a visit to Idomeni on Saturday to distribute aid to the Red Cross and other non-governmental organisations.

Aid agencies have expanded the Idomeni camp as new arrivals cause more overcrowding. However, living conditions are deteriorating and it is feared another 18,000 refugees elsewhere in Greece will eventually arrive at the border.

Al Jazeera’s Hoda Abdel-Hamid, reporting from Idomeni, said: “Once it is in place – and that will not be before Monday – it would mean there is a release of emergency funds, first 200,000 euros, to help out in this camp, provide more tents, food, blankets and facilities. There is no running water here.”

Up to 1,000 more refugees arrived on Saturday in the Greek port of Piraeus from the Aegean islands of Lesbos and Chios, the Greek coastguard reported.

The neighbouring former Yugoslav republic of Macedonia has stopped all but a trickle of Iraqi and Syrian refugees from crossing, following similar restrictions by countries further north on the route to western Europe.

The moves have caused a huge bottleneck in Greece, whose islands’ proximity to the Turkish coast has made it the preferred entry point for refugees and other migrants seeking better lives in Europe.

Greek authorities said only about 180 people crossed the border between 6am on Friday and the same time on Saturday morning.

“The former Yugoslav republic needs to open immediately to borders and the European Union needs to implement severe action against the countries that are closing borders today, whether they are members of the European Union or candidate members,” Tzitzikostas said.

“This is unacceptable what they are doing.”

Tzitzikostas said the region needed the emergency measures – or alternatively for the law to be amended – so that regional authorities can obtain the necessary emergency supplies and food to support the refugees and improve their living conditions.

READ MORE: Can Greece cope with the refugee crisis?

He also called on the government to provide a comprehensive plan on how to handle the crisis.

The EU and Turkey – the transit country for refugees heading to Greece – will hold a summit on Monday to discuss the refugee crisis.

“We are expecting Turkey to start finally doing what it should be doing for months now and we also expect our European partners to start receiving refugees in their countries,” Tzitzikostas said.

“There needs to be a proportional distribution between the countries.”

The refugee camp at Idomeni has a capacity of about 2,000 and has dramatically overflowed, with new arrivals daily setting up small tents along the railway tracks next to the camp and spilling out into surrounding fields. 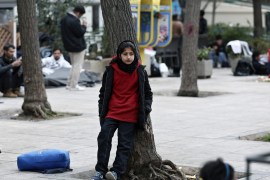 The booming fake passport market for refugees in Athens

People smugglers and their middlemen take advantage of huge influx of refugees camped out in Greek capital. 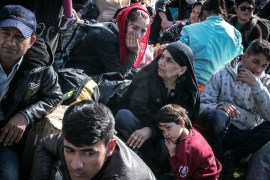 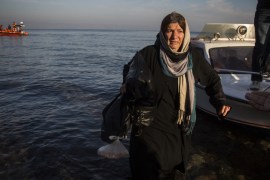