Turkish riot police have fired plastic bullets and tear gas to disperse hundreds of protesters who gathered outside the offices of Zaman newspaper in Istanbul, a day after it was seized by authorities.

The officers set up barricades on Saturday outside the headquarters of Turkey’s largest-circulation daily, which has been reopened under government control.

“It is a dark day for Turkish democracy and a flagrant violation of the constitution,” Akarcesme told Reuters news agency.

He said most Turkish media were not fully reporting the takeover out of fear they could face similar reprisals.

Staff took to social media to post photos of armed special forces inside the building and also guarding the barricaded perimeter after police raided the offices.

“It has been a habit for the last three, four years, that anyone who is speaking against government policies is facing either court cases or prison, or such control by the government,” Bilici had earlier said.

Today’s Zaman’s Saturday edition, published before the takeover, printed its entire front page in black with the headline: “Shameful day for free press in Turkey.”

“We are here to defend democracy and freedoms,” one protester told Al Jazeera.

Aktay rejected allegations about media intolerance by the Turkish government.

For his part, Robert Pearson, a former US ambassador to Turkey, told Al Jazeera the move to take over the newspaper was not unexpected. 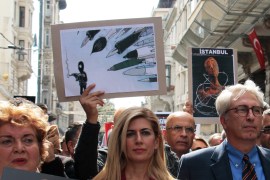 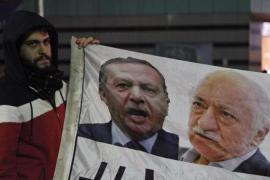