China will never allow Taiwan to be “split” off from the rest of the country ever again, President Xi Jinping was quoted as saying on Sunday – a strong warning to the island against any moves towards independence.

China considers self-ruled and democratic Taiwan a wayward province to be brought under its control by force if necessary. Defeated Nationalist forces fled to Taiwan in 1949 after the Chinese civil war.

Beijing has repeatedly warned against any moves towards independence since January’s landslide win by Tsai Ing-wen and her Democratic Progressive Party (DPP) in Taiwan’s presidential and parliamentary elections.

At the annual meeting of congress, Xi made apparent reference to the Qing dynasty’s loss of Taiwan to Japan in 1895, who then ruled the island as a colony until the end of World War II.

“We will resolutely contain ‘Taiwan independence’ secessionist activities in any form, safeguard the country’s sovereignty and territorial integrity, and never allow the historical tragedy of the nation being split to happen again,” Xi said.

“This is the common wish and firm will of all Chinese people. It is also our solemn commitment and our responsibility to history and the people,” he added.

Tsai has said she would maintain peace with China, and Chinese state-run media have also noted her pledges to maintain the “status quo” with China.

Without making direct mention of Tsai, who assumes office in May, Xi said Beijing’s policy towards Taiwan was clear and consistent and “will not change along with the change in Taiwan’s political situation”.

“Compatriots from both sides of the Taiwan Strait are expecting the peaceful development of cross-Strait relations, and we should not disappoint them.”

Many in China are deeply suspicious of Tsai.

Speaking on Sunday at a meeting on sidelines of the congress, Lin Xianshun, a Chinese military officer who defected from Taiwan in 1989, said she was a “schemer” who wanted to have the benefits of good economic ties with China at the same time as coveting Taiwan’s independence.

The past eight years have been marked by calm between China and Taiwan, after the election of the China-friendly Ma Ying-jeou as president in 2008 and his subsequent re-election.

Ma signed a series of key economic deals with Beijing and held a landmark meeting with Xi in November 2014.

But a controversial trade pact has languished in the island’s parliament after protests erupted over trade dealings with Beijing. 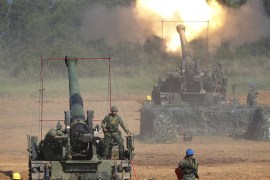 China summons US envoy over sale of warships to Taiwan

Beijing says it made “solemn representations” to US representative, a day after Washington announced new arms deal. 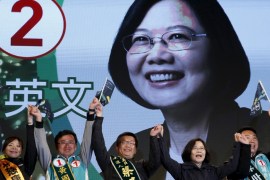 They say all politics is domestic, but Taiwan’s domestic politics carries major ramifications for the region and beyond.