Venezuela’s opposition-led congress has passed an amnesty bill that aims to free more than 70 high-profile activists and politicians, setting up a fight with President Nicolas Maduro.

Foro Penal, a Venezuelan human rights group that backed the amnesty bill, passed on Tuesday, has logged about 4.000 detentions related to protests since 2014. Almost 400 of the detainees were minors or teenagers.

Among the prominent figures who could be freed if the bill becomes law is opposition leader Leopoldo Lopez.

Lopez was convicted of inciting 2014 anti-government protests that led to violence killing 43 people. He was found guilty of provoking arson, violence and damage to public property and condemned to 13 years and nine months in prison.

But human rights groups allege that the charges were politically motivated and have called Lopez one of Latin America’s highest-profile political prisoners.

Meanwhile, Maduro has vowed to veto the bill, blasting it as an attempt to liberate whom he called criminals.

And officials from Maduro’s United Socialist Party said that if congress overrides Maduro’s veto of the bill, the Supreme Court will block the legislation. The court has thwarted most congressional action this year.

“The approval of the criminal law; the assembly is passing it today. They gave it a ‘fast track’ and from one day to the other they are passing a law to protect murderers, criminals, drug traffickers and terrorists,” Maduro said.

Maduro has echoed his predecessor Hugo Chavez by saying there are no political prisoners in Venezuela, just politicians in prison.

The bill was passed amid growing public frustration against the government over a deep economic recession, severe inflation, and the scarcity of food, medicine and other necessities.

According to the Venezuelan Observatory of Social Conflict, there have been more than 1,000 protests held across the country in the first two months of this year alone.

On Tuesday, in the city of San Cristobal, which had been the epicentre of nationwide anti-government demonstrations in 2014, a group of people protesting a hike in public transport fares hijacked a bus, officials said.

Two officers were killed and four wounded while the group attempted to drive the bus through a police cordon to a university, where about 70 other demonstrators were rallying against the fare hike.

“We regret the loss of life of police officers who were carrying out their duties,” state Governor Jose Vielma said. 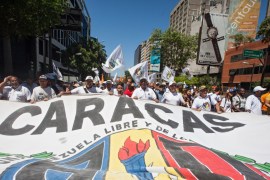 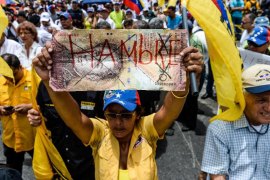 Coalition in control of legislature plans for constitutional changes and protests against President Nicolas Maduro. 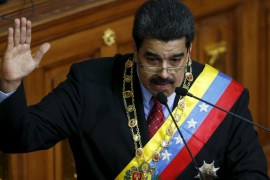