A Hebron-based rights group has demanded that Israel holds its army accountable for the killing of a Palestinian by an Israeli soldier that was caught on camera.

A video of the incident showed the soldier step forward and shoot 21-year-old Abed al-Fattah Yusri al-Sharif in the head at close range earlier this month.

Outrage grew in the occupied West Bank on Tuesday after Israel’s military court called evidence against the soldier “inconclusive”, even as the UN said it was an apparent extra-judicial execution.

Fattah and another Palestinian were accused of stabbing an Israeli soldier in Hebron.

During the incident Fattah was shot and wounded, while his partner Ramzi Aziz al-Qasrawi was killed instantly.

As Fattah was lying on the ground, the soldier was captured on camera raising his firearm and shooting him in the head, killing him.

The Israeli army had arrested the soldier but Lieutenant-Colonel Ronen Shor, the judge, said on Tuesday there was “reasonable doubt” about the circumstances of the shooting “given the complexity of the events” surrounding a stabbing incident and the killing that followed.

Shor also ruled the soldier be held in custody for two more days. Prosecutors earlier said the shooting was “intentional” and asked the court to extend the soldier’s detention until April 7 while the investigation is ongoing.

“It’s a big lie, it was not the right of the soldier to shoot Fattah as the soldier was not in any sort of danger from any of the Palestinians,” Issa Amro, director of the Hebron-based Youth Against Settlements activist group, told Al Jazeera.

“None of the Palestinians killed were found to have any explosives on them. The commander gave a direct order to the soldier to shoot and kill the Palestinian. This is a kind of revenge for them. I’ve heard army commanders tell soldiers to shoot without any excuse.

“Killing a Palestinian, or any human, is a crime, especially when no threat was shown.”

While the UN had earlier condemned the “gruesome” killing, hundreds of protesters had rallied outside the court on Tuesday in support of the soldier.

Protesters, as well as some politicians on the right, criticised Defence Minister Moshe Yaalon, who had said the soldier acted inappropriately.

In addition, more than half of Israelis surveyed by a TV station back the soldier, who has also attracted support on social media.

According to the poll conducted for Israel’s Channel 2, around 57 percent of Israelis were against the soldier’s arrest and 42 percent of those questioned described the 19-year-old’s actions as “responsible”.

Only 5 percent classified the shooting as murder.

“The UN needs to establish an independent committee to investigate these extra-judicial killings, including that of Sharif’s,” said Amro.

“This was not the first case and it won’t be the last case. There are videos out there for everyone to see.

“Also, it is the Israeli military system that needs to be held accountable, not just the soldier. These are war crimes and severe violations to international law. But I don’t see anything happening in court.

“The soldier will probably be released. The majority of Israelis are against his arrest and the case has political leaders’ backing.” 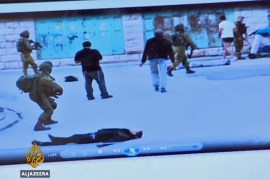 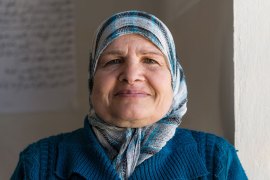 An oasis of peace for Palestinian children in Hebron 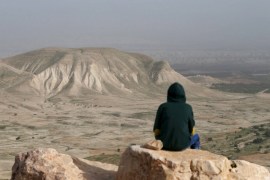