World leaders, politicians and celebrities have offered their sympathy to the victims of a suicide attack in Lahore which killed at least 70 people.

The bombing, which also wounded hundreds, was carried out at a busy park attended by families on the evening of Easter Sunday.

Claimed by a breakaway Taliban faction, Jamaat-ul-Ahrar, the attack deliberately targeted members of Pakistan’s Christian minority who gathered for the holiday.

The suicide bomber detonated himself metres away from the children’s rides at the Gulshan-i-Iqbal park, or Garden of Iqbal, of Allama Iqbal Town.

Most of the victims were women and children, and included both Christians and Muslims.

Here are some reactions:

The Catholic leader addressed thousands in St Peter’s Square on Easter Monday. He called the attack a “vile and senseless crime.

“I appeal to civil authorities and all sectors of that nation to make every effort to restore security and serenity to the population, and in particular to the most vulnerable religious minorities,” he said.

Heard about the blast in Lahore. I strongly condemn it. My condolences to families of the deceased & prayers with the injured: PM

Canada condemns the deplorable bombing in Lahore, Pakistan. Our thoughts and prayers are with all those killed or injured. #LahoreBlast

I'm shocked by the terrorist attack in Lahore. My thoughts are with the families and friends of the victims. We will do what we can to help.

Strongly condemn the terror attack in Lahore in which our innocent citizens including women & children lost their lives.

We are grieving today for the families affected by the deplorable attack in Lahore. No one should ever fear taking their children to a park.

My prayers are with the victims of the horrific Easter Day attack in Lahore. Pakistan and all nations must confront & defeat terrorists. -H

I don't care what your fighting for but u do this to children u are going to burn in hell. #LahoreBlast

-Please direct your prayers where they are needed, to the innocent victims of the Lahore attack.

Any act of terror is an assault on entire humanity. Only fearlessness, unity and peace can defeat such forces. Stay united #Lahore #Brussels

For our full story on the blast in Lahore, click here. 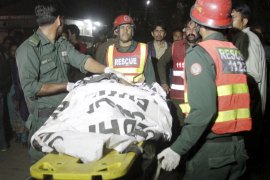 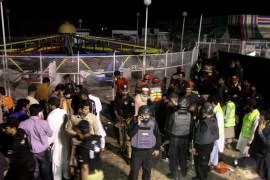 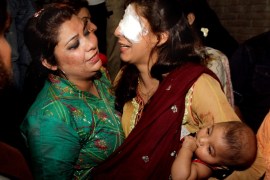