New Zealand has voted to keep its current flag by a margin of 57 percent to 43 percent in a nationwide poll.

More than two million people voted in the ballot to decide whether to keep the British Union flag on their flag or replace it with a silver fern.

The current flag, which has been the national symbol since 1902, was up against a new design that was chosen from more than 10,000 entries submitted by the public.

Those advocating change argued that the flag was a relic of the nation’s colonial past and too similar to Australia’s flag, but the alternative design failed to gain the momentum it needed to win.

Some New Zealanders said it looked garish, a design better suited to a beach towel, while others said the whole process was politically motivated.

One group that was pleased with the result was the Returned and Services’ Association, which represents war veterans.

“I’m so proud, especially for the guys that have fought in the wars in the past. It was a brilliant result,” Linda Bullions, RSA patron, told Al Jazeera.

The vote had been pushed by Prime Minister John Key, who was an eager proponent of change, but some saw the endeavour as an effort by him to create a legacy.

Others were put off by the cost of the change, put at $17m.

In the end, the vote represented a rare political defeat for Key, who has won three straight elections and led the country for eight years.

The turnout in the referendum was the country’s highest in 20 years – something Key said proves it was a discussion worth having.

“Probably every schoolchild in New Zealand has had a discussion about what the flag means and on a majority basis we’ve done something that no other country in the world has done,” he said after the result came out.

Historian Malcolm Mulholland was part of the government’s flag consideration panel, and said the discussion is far from over. 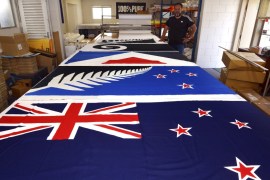 Ballot on whether to replace colonial-era flag will extend over the next three weeks, with results expected on March 24.