However, the closure of the centre in April last year left her with very few options.

Her family, which lives 70km from Taiz in the village of al-Asabeh, braved ongoing fighting and a siege on the city to take Asbahi to a temporary clinic set up in the city centre. But her brother, Osama, told Al Jazeera that once they arrived, a doctor said the clinic had run out of chemical injections and did not offer radiation therapy.

After borrowing more than $2,300 to send Asbahi to 280km journey to Sanaa every three weeks for chemotherapy, Asbahi’s family could no longer afford her cancer treatment.

Asbahi stopped going to Sanaa last June, and she died on February 28.

“Painkillers were the only things we could give Sina during the last three months, because we did not have money to help her,” Osama said, visibly shaken by the loss of his sister.

Asbahi was one of many Yemeni patients struggling to get the care they need during the ongoing war, which has pitted Houthi rebels against a coalition of Arab states led by Saudi Arabia.

According to figures from the World Health Organisation, 6,400 people have been killed in the past year, half of them civilians, and more than 30,000 have been injured, with a further 2.5 million people displaced.

One year on, Yemen’s healthcare system is in tatters. Nearly 300 hospitals and healthcare facilities have suffered damage in the war, Ahmed al-Qubati, the central monitoring coordinator at Yemen’s Health Ministry, told Al Jazeera.

More than 4,000 health facilities are still working, but most are not in conflict zones such as Taiz city, while some others are working without permission from the Health Ministry. “Most of these hospitals and health facilities have closed either completely or partially, after they were targeted by either the Houthis or the Saudi-led air strikes,” Qubati said.

Further compounding the problem is the fact that most provinces across Yemen have been without a steady supply of electricity since April 2015, forcing hospitals and other health facilities to rely on expensive, fuel-powered generators.

Many foreign doctors who performed specialised procedures have left Yemen, while local factories that manufactured medicines have closed due to power cuts, and medical imports have slowed to a trickle, Qubati said.

The cost of some medicines has doubled, while the factories that once produced 15 percent of the country’s medical stockpiles are now only manufacturing five percent.

Cancer patients in Taiz are waiting for either the shelling or the cancer to kill them.

There is a lack of medicine for blood pressure, psychological disorders, stomach problems and some other kinds of drugs, Qubati said, confirming that the local factories do not produce the alternative medicines.

“When we try to find a solution for one problem, another one appears,” Qubati said, noting that the most pressing priority now is importing much-needed medicine and supplies and providing state-run hospitals with enough fuel to function. They are going to import some medicines, such as those for blood pressure, from Egypt.

“If the war continues … I expect more hospitals and health facilities to close, and that means more casualties,” he said.

Qubati says that 10 percent of those sick are unable to access the healthcare they need, but some of them can live without it even if this may affect their health.

Others have already died because they could not access the healthcare they needed.

“If the war continues to next year, I think the percentage will increase, but I hope that we can find a solution,” Qubati added.

Meanwhile, back in Taiz, Mashal al-Kuraimi, a 25-year-old with liver cancer, said he used to get a monthly chemical injection at the temporary cancer centre in the city, but he has not received it since late December because those injections are no longer available.

“Cancer patients in Taiz are waiting for either the shelling or the cancer to kill them,” he told Al Jazeera.

Al-Amal centre for oncology previously housed radiation therapy machines, but much of the equipment was destroyed when Houthi fighters hit the centre last July.

Houthi fighters took over the centre in May 2015, but last July the popular resistance forces managed to push the Houthis out of the area. Houthi fighter then reportedly shelled the centre.

Many of the machines that are still intact are not operational, Al-Amal director Mokhtar al-Mikhlafi said, adding that they could not transfer those machines to the new centre, fearing confiscation by Houthi fighters deployed on the road between the old centre and the temporary one.

“There is not enough chemotherapy in the centre; we do not have the medicine for leukemia. We need medical solutions, and we need machines for radiation therapy,” Mikhlafi said, noting that 680 people died of various types of cancer last year, compared with 216 casualties in 2014.

“The war is the main cause for the increase in casualties,” he said, adding that some patients cannot even reach the temporary clinic because the war has made entering Taiz too dangerous. 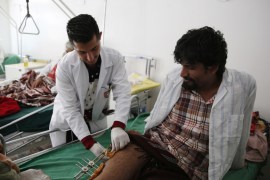 Hundreds of healthcare facilities in the war-torn country have been rendered nonfunctional, as casualty numbers rise.