A Russian court sentenced Ukrainian pilot Nadezhda Savchenko to 22 years in jail after finding her guilty of involvement in the killing of two Russian journalists during the separatist conflict in eastern Ukraine.

Savchenko, 34, who has become a national hero in Ukraine, was defiant as the verdict was read out on Tuesday, singing the Ukrainian national anthem while standing on a bench.

She has denied having anything to do with the deaths of the journalists who were killed in an air strike in 2014. Savchenko was accused of calling in the coordinates.

The sentence is likely to further inflame Russia’s relations with Kiev, and prompt protests from the European Union, which has called for Savchenko’s release.

“Ukraine will never – I repeat, never – recognise either the kangaroo court of Nadezhda Savchenko, nor the so-called sentencing,” he said in a statement, in which he called on Russia’s Vladimir Putin to honour a promise to return Savchenko to Ukraine.

Russian officials signalled that, once the trial was over, they may be open to negotiations about handing Savchenko over to Ukraine, possibly as part of a prisoner exchange.

Kiev is holding at least two people it says are serving Russian soldiers seized on the battlefield in eastern Ukraine.

Ukrainian Foreign Minister Pavlo Klimkin wrote on Twitter “the result is an expected one, but all the same it’s pretty painful”.

I thank @FedericaMog for her personal attention to the #Savchenko show trial and EU diplomats for their presence in the courtroom.

The judge – between shouted interruptions from Savchenko who was dressed in a T-shirt bearing the Ukrainian trident, a state symbol – dismissed arguments from her lawyers that she could not have been involved in the journalists’ killings.

“The evidence provided by the prosecution side is trustworthy and completely disproves the theory of the defence about Savchenko’s innocence,” the judge said.

He said the court had decided “to select as the final punishment for Savchenko 22 years of confinement of liberty with a fine of 30,000 roubles [$442]”.

Savchenko, who had taken leave from her job as a military pilot to volunteer with Ukraine’s ground forces fighting against the separatists in eastern Ukraine, was captured by pro-Moscow rebels in June 2014.

She has repeatedly gone on hunger strike, and from the glass and metal cage where she has been held in the courtroom, has often shouted her view that she is the victim of a show trial aimed at humiliating Ukraine.

In her absence, she was elected a member of the Ukrainian parliament. 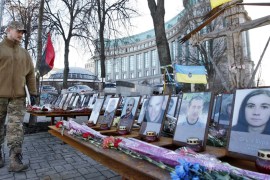 We speak to the mayor of Kiev and former heavyweight champion Vitali Klitschko, and we fact-check China’s economic boom. 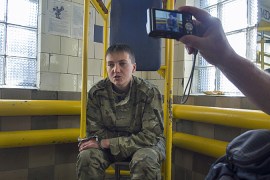