Businessman Patrice Talon has won the second round of Benin’s presidential election, his adversary and incumbent Prime Minister Lionel Zinsou acknowledged before the release of official results.

“The difference is significant, [Talon’s] electoral victory is certain. I have called Patrice Talon this evening to congratulate him on his victory, wish him good luck and put myself at his disposal to prepare for the handover.”

Some 4.7 million people were eligible to cast their votes in the ballot to elect a successor to Benin’s outgoing President Thomas Boni Yayi.

He is bowing out after serving a maximum two five-year terms, marking him out from many African leaders who have tried to change their country’s constitution to stay in power.

Benin’s electoral commission is expected to announce provisional results at some time on Monday, Zinsou said.

The 61-year-old had come out top in the first round of elections held on March 6, with 27.1 percent of the vote compared with 23.5 percent for Talon.

The prime minister, who was a candidate for Boni Yayi’s Cowry Forces for an Emerging Benin (FCBE), was seen as the frontrunner with the support of most members of parliament.

But Talon, a 57-year-old entrepreneur who made his money in cotton and running Cotonou’s port, billed himself as the authentic Beninese candidate and repeatedly attacked his opponent’s dual French nationality.

Zinsou, who attended an elite French university and was a speechwriter for the former prime minister Laurent Fabius, has been called a “yovo” or “the white man” during the campaign. 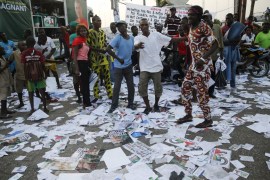 Thirty-three candidates are standing in election to replace President Boni Yayi, who is stepping down after two terms. 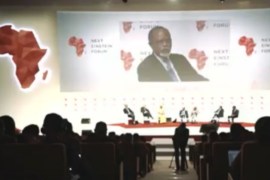