North Korea has launched five projectiles into the Sea of Japan, its latest military manoeuvre amid concerns about its nuclear programme.

South Korea disputed Pyongyang’s description of the projectiles as “missiles” on Monday, saying instead the objects were smaller “short-range projectiles” – most likely conventional shells.

South Korean officials said the five projectiles flew about 200 kilometres after being launched from an area about 20km south of Hamhung on Monday afternoon local time.

Tensions have been soaring on the divided Korean peninsula since the North carried out its fourth nuclear test on January 6, followed a month later by a long-range rocket launch that was widely seen as a disguised ballistic missile test.

The UN Security Council responded earlier this month by imposing its toughest sanctions on North Korea to date.

In recent weeks Pyongyang has maintained a daily barrage of nuclear strike threats against both Seoul and Washington, ostensibly over continuing large-scale South Korea-US military drills that the North sees as provocative rehearsals for invasion.

“It’s the timing of this that is so interesting, because on Friday North Korea said it carried out two ballistic missile tests roughly in the same area,” he said.

“A few days before, the North Korean military warned that it was launching multiple ballistic missile launches and a nuclear warhead test,” Brown said, adding that the tests were a “slap in the face of China”, Pyongyang’s closest ally.

US and South Korean intelligence assessments do not currently hold the North capable of launching missiles carrying a nuclear weapon.

Analyst BJ Kim from Hankuk University in Seoul told Al Jazeera that Pyongyang was “raising the stakes” with an eye on possible talks with Western powers.

“At this point from the North Korean perspective it makes perfect sense to look tough … this is very predictable behaviour that we’ve been seeing,” he said.

“We hope North Korea does not do anything to contravene UN Security Council resolutions,” she said.

“We also hope all sides can remain calm and exercise restraint and avoid doing anything to exacerbate confrontation or tensions.”

Speaking on China’s ability to rein in the North, Kim said Pyongyang had become increasingly dismissive of the pressure Beijing could put on it.

“They [North Korea] are trying to show to the world that China doesn’t have much leverage over them and that they’re on their own,” he said. 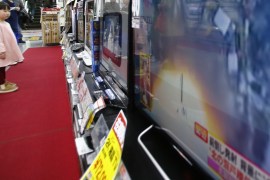