Extreme bleaching has caused the death of large amounts of coral on Australia’s iconic Great Barrier Reef, prompting the government to implement its highest response level to help tackle the crisis.

“The corals in the remote far north of the reef experienced extremely hot and still conditions this summer, and were effectively bathed in warm water for months, creating heat stress that they could no longer cope with,” said Russell Reichelt, the chairman of the Great Barrier Reef Marine Park Authority.

He said a level three response meant stepped-up surveys to better understand and tackle threats to the reef.

Reichelt said, however, that the “extent and severity of bleaching varies greatly across the reef” and weather conditions “have so far spared most sections of the 344,400 square kilometre marine park from coral die-off”.

More than $3bn is generated each year from the Reef’s tourism industry.

The WWF, the wildlife protection group, said on Monday that while it welcomed the government’s action, higher-level policy decisions needed to be taken to address the root cause of the problem.

“This is the worst coral bleaching event ever to hit this most pristine part of the Great Barrier Reef,” said WWF spokesman Richard Leck.

“We can turn this around. The reef can recover but we must speed up the shift to clean, renewable energy and we must build reef resilience by reducing runoff pollution from farms and land clearing.

“Australia must speed up the transition to clean energy – like solar and wind – by setting a target of 100 percent renewable electricity by 2035.” 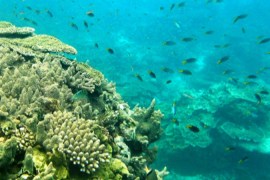 About 3m cubic metres of mud will be dumped near world heritage site after approval to expand Queensland coal port. 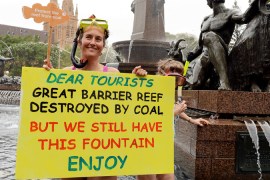 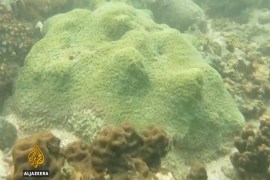