Turkey’s interior minister said on Sunday an Islamic State of Iraq and the Levant suicide bomber carried out the attack in Istanbul that killed five people and wounded more than 30 others.

Efkan Ala said a Turkish member of ISIL – also known as ISIS – was responsible for Saturday’s blast on tourist-popular Istiklal street that killed three Israelis, an Iranian, as well as the bomber.

“We have determined that Mehmet Ozturk, born in 1992 in Gaziantep, has carried out the heinous attack on Saturday in Istanbul,” Ala said in a news conference broadcast live on television.

“It has been established that he is a member of Daesh [the Arabic acronym for ISIL],” he added.

Five arrests have been made in connection with the attack, the minister said.

The identification was based on DNA tests using a blood sample from a relative, state news agency Anadolu reported.

ISIL has so far not claimed responsibility.

The blast occurred as Turkey investigates a string of recent attacks, including a massive car bombing in the capital Ankara on March 13 which killed 37 people.

The Ankara bombing was claimed by the Kurdistan Freedom Falcons (TAK), a splinter group of the banned Kurdistan Workers’ Party (PKK).

Saturday’s bombing was the fourth such attack in Turkey this year, bringing the death toll to more than 80. 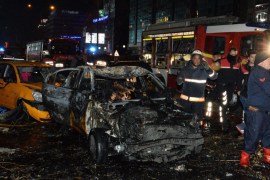