North Korea’s highest court has sentenced an American tourist who allegedly attempted to steal a propaganda banner from a restricted area of his hotel to 15 years of hard labour in prison.

Otto Warmbier, a 21-year-old University of Virginia undergraduate, was convicted and sentenced in a one-hour trial on Wednesday morning at the North’s Supreme Court. He was charged with subversion.

No further details were immediately available.

Warmbier was arrested in early January as he tried to leave the country after visiting as a tourist with a New Year’s tour group.

In a statement made before his trial, he told a gathering of reporters in Pyongyang that he wanted the political banner “as a trophy” for the mother of a friend.

North Korea regularly accuses Washington and Seoul of sending spies to overthrow its government to enable the US-backed South Korean government to control the Korean peninsula.

Warmbier was arrested while visiting the country with Young Pioneer Tours, an agency specialising in travel to the North, which is strongly discouraged by the US State Department.

He had been staying at the Yanggakdo International Hotel, on an island in a river that runs through Pyongyang. 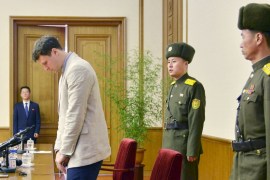 Detained student put in front of the media confesses to taking political poster for a US church in return for a car. 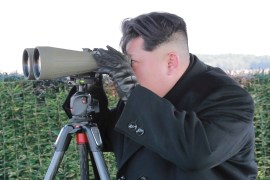