US Republican presidential frontrunner Donald Trump has scored a major win in the Florida primary, dealing a bitter defeat to his rival Marco Rubio, a senator from the state, who dropped out of the race afterwards.

The former US Secretary of State Hillary Clinton, meanwhile, increased her lead in the number of delegates against her opponent Senator Bernie Sanders in the Democratic race.

Trump was aiming to cement his lead on Tuesday and scored well in the winner-takes-all Florida primary, taking all 99 of the state’s delegates with nearly 46 percent of the vote, in front of Rubio on about 27 percent.

His campaign was dealt a blow in Ohio, however, where home-state Governor John Kasich was declared a relatively comfortable winner.

The New York businessman won in North Carolina, but will split the delegates there with Texas Senator Ted Cruz.

The pair were locked in a tight battle in Missouri, with Trump slightly ahead – 40.8 percent to 40.7 percent – with 99 percent of votes counted.

Trump also won in Illinois, but it is not yet clear how the state’s delegates will be split, as the count is carried out at the congressional district level.

On the Democratic side, Clinton, 68, captured the Florida primary and won North Carolina, Ohio and Illinois as she put distance between herself and Sanders.

With 99 percent of the votes counted in Missouri, Clinton was holding on to a 49.6 percent to 49.4 percent lead over Sanders in a contest that is still too close to call.

“We are moving closer to securing the Democratic Party nomination and winning this election in November,” Clinton told her supporters in Florida on Tuesday evening.

Trump, the 69-year-old billionaire businessman, was aiming to knock out his two mainstream rivals, Rubio and Kasich, but the latter survived with his win in Ohio.

“While we are on the right side this year, we will not be on the winning side,” Rubio told supporters in Miami.

Trump’s closest challenger nationally is US Senator Ted Cruz of Texas, 45, a favourite of the conservative Tea Party.

At a campaign event in Houston, Texas, Cruz said that he was the only candidate who could challenge Trump.

“No one else has any mathematical possibility,” he said. “Only one campaign has beaten Trump over and over and over again … Not once, not twice, but nine times, all across the country, from Alaska to Maine.”

Trump’s loss in Ohio could give new hope to Republicans battling to deny him the nomination and block him from capturing the 1,237 delegates needed to win the nomination at the party’s July convention.

Trump has vowed to deport 11 million illegal immigrants, impose protectionist trade policies and ban Muslims from entering the US.

Trump said on Tuesday that his momentum was already drawing in establishment Republicans who had previously balked at his candidacy but now see him as the likely nominee.

“They’re already calling,” he told television station NBC, without naming names. “The biggest people in the party are calling.”

By capturing Florida, Trump will win all 99 of the state’s delegates, giving him a huge lift in his drive to the nomination.

Rubio’s withdrawal leaves Kasich and Cruz as Trump’s last opponents. Kasich was declared winner in Ohio, but has not won another state so far. Cruz has struggled to build support beyond his base of evangelical Christians and Republican Southerners. 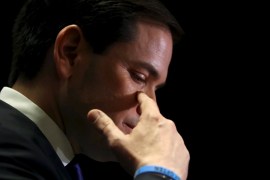 Florida senator drops out of US presidential campaign after being steamrolled in his home state by Donald Trump. 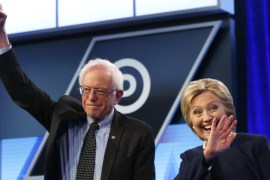 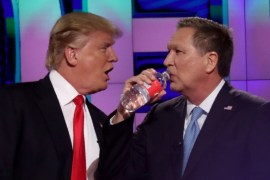 Polls show Ohio governor either in a tie with or leading billionaire businessman in contest for state’s 66 delegates.