Htin Kyaw, a trusted aide and confidant of Myanmar’s democracy leader and Nobel laureate Aung San Suu Kyi, is poised to become the country’s new president when parliament votes for its next leader on Tuesday.

Htin Kyaw, 69, was nominated by the lower house of parliament as the opposition party National League for Democracy (NLD) takes power.

Because Suu Kyi was married to a foreign national, she is constitutionally unable to become president, though she has stated she will be in charge of the government.

Al Jazeera’s Wayne Hay said there was speculation on Tuesday that Suu Kyi may become Myanmar’s prime minister – a position that doesn’t currently exist – which would likely cause friction with the powerful military.

“As prime minister she would be able to travel the world and meet with world leaders, basically fulfil the role of being the president without actually having that title,” said Hay.

Suu Kyi led the NLD to a landslide victory in the November 8 general elections after decades of often brutal rule by Myanmar’s generals.

Htin Kyaw gave up a career in the foreign ministry to help Aung San Suu Kyi, his childhood friend, with her political party.

When Myanmar was under military rule, Htin Kyaw ended up in the junta’s prison along with other pro-democracy activists.

READ MORE: Will Suu Kyi lead Myanmar from behind the scenes?

Htin Kyaw is the son of a poet and the son-in-law of a founding member of the country’s pro-democracy movement.

Until last week, Htin Kyaw was hardly a household name and most people in Myanmar would not have seen him becoming president of the country’s first democratically elected government in more than a half-century.

Suu Kyi nominated him “obviously to show that he is the most trusted person for her”, said Zaw Min, 48, a former NLD member.

“If this kind of person leads the country … it will also affect positively on the people of this country.”

For its part, Myanmar’s military – with 25 percent of seats in parliament – has questioned Suu Kyi’s picks for president and vice president.

The military member of a parliamentary commission formed to vet candidates abstained on Monday from voting on Htin Kyaw because he is not an elected MP, even though the constitution does not stipulate a candidate must be a legislator. 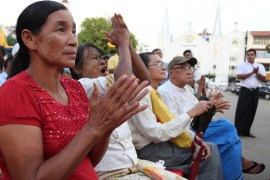 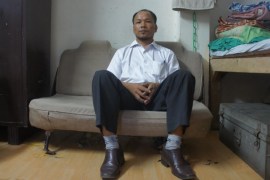 Refugees from Myanmar say ‘Delhi is our future’

Refugee Lal Pian Thanga says he had no choice but to escape Myanmar and that India is now home for his family.