Israeli forces shot and killed three Palestinians during alleged attacks at the entrance of an Israeli settlement as deadly violence in the occupied territories continues unabated.

The Israeli military said two Palestinians drove their car into a bus stop, then opened fire on soldiers waiting at the entrance of Kiryat Arba, a settlement near Hebron on the southern West Bank on Monday.

Forces guarding the area responded and shot the alleged attackers, the army said. A soldier was wounded and evacuated to a hospital.

About 20 minutes later, a car rammed into a military vehicle at the scene and soldiers shot dead the Palestinian driver. Three Israeli security forces were wounded in the second attack.

The Palestinian Authority Ministry of Health confirmed the deaths.

Since October 1, Israeli forces or settlers have killed 199 Palestinians, including unarmed demonstrators, bystanders and attackers, more than 55 from Hebron.

The surge in violence erupted in Jerusalem in October after an increase of Israeli incursions into the al-Aqsa Mosque compound, Islam’s holiest site outside Saudi Arabia. Many Jews revere the area as a vestige of their biblical temples.

Palestinians blame the violence on oppression and deep disillusionment after peace negotiations collapsed two years ago. 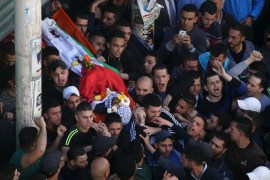 Israeli army says teenagers were shot after they wounded a Jewish settler in the occupied West Bank. 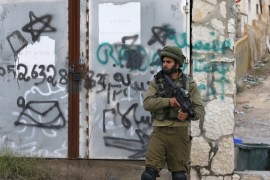