Tens of thousands of Iraqis have taken to the streets of Baghdad for the third week in a row to demand a political overhaul.

Gathering on Friday in the capital, protesters heeded a call to gather by powerful Shia cleric Muqtada al- Sadr, who is pressuring the Iraqi Prime Minister Haider al-Abadi to push on with a plan to form a cabinet of independent ministers.

In a pre-recorded speech aired during the demonstration, al-Sadr said: “I urge Iraqi Prime Minister Haider al-Abbadi to press on with plans to form an independent cabinet of technocrats, to fight graft despite political pressure to desist.

“I want the prime minister to continue his reform plan with no fear of political pressure.”

The cleric has given the prime minister 45 days to appoint a cabinet, which he hopes will tackle corruption. If al-Abadi fails, he says he will bring a vote of no confidence in parliament.

Those attending the demonstration held up banners calling for a clean sweep of the government, and chanted that they would defend Iraq with their “blood and souls”.

Al Jazeera’s Jane Arraf, reporting from Baghdad, said that while there were few banners with al-Sadr’s photograph, “it was clearly his rally”.

“There have been protests before. This one is an indication of ongoing rifts between some political parties backing the prime minister.”

Our correspondent said that al-Sadr had urged the government in the past to give land previously granted to corrupt officials to those in need, and called for senior government officials to donate half of their salaries to the poor and those fighting against the Islamic State of Iraq and the Levant group.

She added that al-Sadr had warned the prime minister that if he fails to come up with a new government, he would send his followers to the heavily fortified “Green Zone”, which houses government buildings and foreign embassies, including that of the United States.

“He’s told that embassies and missions that they shouldn’t be afraid of an attack, but it is still very clearly a threat,” our correspondent said.

A day ahead of Friday’s protests, al-Abadi delivered a televised speech to the Iraqi public where he said he had submitted reforms to to implement the promised ministerial reshuffle.

The leader first announced his plan to reshuffle the cabinet in February.

The current Iraqi political structure is a quota-based system in which each ethnic and religious group – such as Shia, Sunni, Christians Arabs, Kurds and others – is assigned its own specific representation in the parliament, government and military. 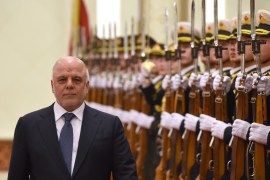 Iraqi PM ready to resign as part of cabinet reshuffle 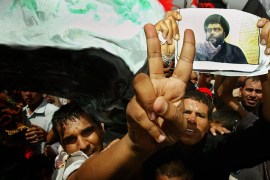