Dozens of Iraqi soldiers and a general have been killed in separate suicide bombing attacks in Baghdad and Fallujah.

Two consecutive suicide bombers from the Islamic State of Iraq and the Levant (ISIL) group killed at least 25 Iraqi soldiers and Popular Mobilisation Force fighters when they targeted their convoy in the village of Jumailah in northern Fallujah, military sources told Al Jazeera.

Tuesday’s bombings came a day after four ISIL suicide bombers infiltrated an army headquarters west of Baghdad, detonating their explosives and killing an Iraqi general and five soldiers, according to police and army officials.

Suicide bombings and other attacks against Iraqi forces and other groups have become increasingly common in Iraq in recent months.

Earlier on Monday, a suicide bomber blew himself up at a funeral in Miqdadiyah, a town northeast of Baghdad in the province of Diyala, killing at least 38 people and injuring scores more.

Muthanna al-Tamimi, Diyala’s governor, said: “Miqdadiyah will not fall into the trap of sectarian strife promoted by some politicians.”

ISIL, which has seized territory both in Iraq and Syria, claimed responsibility in an online statement, saying a suicide bomber who detonated an explosive belt targeted a gathering of militia members.

The statement listed the names of some who were allegedly killed.

The attack in Miqdadiyah happened just hours after 16 Iraqi army soldiers and tribal fighters were killed in a village south of Fallujah, in Anbar, after shelling of their barracks.

Amid the rise in violence, Iraqi troops on Tuesday – backed by paramilitary forces and aerial support – launched a new push to retake a key area north of the capital, Baghdad, and dislodge ISIL fighters from there, officials said.

According to a statement by the Joint Operations Command, the “new offensive” began at dawn in an agricultural area northwest of the city of Samarra, 95 kilometres north of Baghdad, with the aim to cut ISIL supply lines and to tighten the grip around the ISIL-held northern city of Mosul.

The command says paramilitary forces, mostly Shia groups, and the Iraqi air force were backing the push on the area, called Jazerat Samarra.

The statement did not say if the US-led international coalition was involved in the operation. 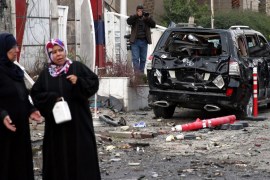 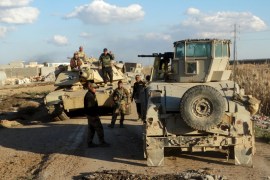 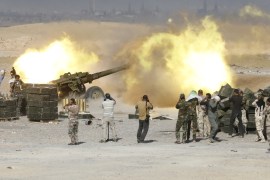 Medical sources say at least five killed in and around Fallujah while an ISIL suicide attack kills at least 13 soldiers.