South Africa’s Constitutional Court has reserved its decision on whether President Jacob Zuma should pay back state money he used to upgrade his private residence.

The court said on Tuesday that it will announce the decision at later date once it has been made.

In a damning report, South Africa’s anti-corruption watchdog accused Zuma in 2014 of having “benefited unduly” from the “excessive” $23m upgrades to his Nkandla home, which included a swimming pool, a cattle enclosure and an amphitheatre.

Zuma, who says that the renovations were essential to improve security, offered last week to repay a portion of the money, but said he wanted the auditor-general and finance minister to determine the amount.

However, opposition parties say Zuma’s offer is not good enough, adding that Tuesday’s court appearance is about fighting corruption.

“White supremacists are happy that this country is falling apart in the hands of black people,” said Julius Malema, the leader of the Economic Freedom Fighters party.

“We are not going to allow Zuma to make us another failure, another failed African state.”

South Africa’s ministry of police has cleared Zuma of any wrongdoing, saying that all the work done to his home was necessary for his protection.

Zuma, the head of the ruling African National Congress, has previously defended the upgrades, saying that the accusations against him were unfair given the importance of protecting any head of state.

The ANC leader has been criticised over the Nkandla scandal by senior party members and by angry youths in a country battling rampant unemployment and inequality. 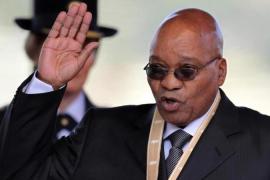 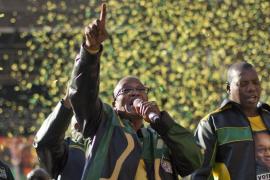 Despite fall in approval ratings, president says that row over $23m upgrade to home will not impact Wednesday’s poll.