Over the weekend, four of Russia’s newest and most sophisticated military aircraft – the Su-35 “Flanker E” – arrived at the Russian airbase of Latakia in Syria.

This comes on the back of another alleged violation of Turkish airspace by a Russian Su-34 “Fullback” fighter-bomber on Friday.

Relations between Ankara and Moscow remain extremely tense since Turkish forces shot down a Russian Su-24 jet after it allegedly violated Turkish airspace for under 20 seconds in November.

Although Turkey is within its legal rights to shoot down foreign military aircraft which violate its airspace and refuse to comply with warnings, Ankara deliberately took a very aggressive stand against repeated Russian violations by shooting down the plane.

This, in turn, seems to have prompted a dual response from Russian President Vladimir Putin.

For his domestic audience – still the most important factor for the Russian leader – Putin has deployed the S-400 advanced air defence system and ordered that jets taking part in operations near the Turkish border are armed with live air-to-air missiles for self-protection.

Internally, such moves are likely intended as a show of defensive strength as a wronged party in the face of Turkish “aggression”.

However, on the international stage, Putin is determined to regain the initiative from Turkey.

Brief violations of NATO airspace, particularly in the Baltic States and Turkey, have been a common Russian tactic to exert pressure in recent years.

The gamble has always been that NATO members would not risk dangerous escalation by exercising their legal rights to fire upon such intrusions.

In November, however, Turkey called the Russian bluff – and in doing so Ankara seized the initiative away from Russia on the issue of airspace.

Whatever Russian media sources spin for internal consumption, the Kremlin understands exactly what happened and that Russia is now reacting to an external escalation – not the other way around.

To that end, Friday’s violation by the Su-34 – a much more formidable aircraft than the plane that Turkey shot down – and the subsequent deployment of four Su-35s is an aggressive message to Turkey and NATO that Russia is back on the offensive.

Four Su-35s will add almost nothing to Russian air strikes in Syria, which continue to hit predominantly moderate rebel-held territory despite claims that they are aimed at the Islamic State of Iraq and the Levant group.

However, these are formidable air superiority machines which can significantly outmatch Turkey’s own F-16C/Ds in any sudden confrontation at the border.

By continuing to violate Turkey’s airspace, Russia is sending a deliberate message that it will not be intimidated and will retain control of escalation dominance in Syria and beyond.

And by sending its most lethal warplane to Syria at the same time, it is reinforcing that message with the implication that if Turkey were to dare fire upon another intrusion, the aircraft in question would likely respond and would be reinforced by jets more capable than those possessed by the Turkish Air Force.

However, the deployment of the Su-35s may further reinforce doubts about the vaunted S-400 system in Latakia.

If fully operational, the S-400’s long-range and advanced missiles can hold a large section of Turkey’s airspace at threat – and, by implication, should deter any further shoot-downs of intruders by Turkish jets at the border for fear of immediate reprisal.

However, there has been speculation that there are only components of part of an S-400 battery in Syria at present, potentially due to a deal with Israel about not placing long-range missile systems there.

This would explain why Russia feels it is necessary to deploy Su-35s as well.

While domestic Russian audiences may be satisfied with the response they feel S-400 represents to the shoot-down, NATO, with its advanced surveillance and detection capabilities in the area, may be aware that the presence of the air defence system is not all it appears to be – and therefore is less intimidated than Russia would like.

The Su-35, on the other hand, is held in high regard as a threat by NATO air forces, including the US one.

It is considered a good match for the most modern European fighters – the Typhoon and Rafale, which are both taking part in operations in the region – and it is only really outmatched by the scarce American F-22 Raptor stealth fighter.

It is, therefore, an ideal tool for intimidating Turkey and NATO more widely.

Russia is thought to have no more than 40 Su-35 fighters in frontline service so the deployment of four aircraft with crews to Syria is also a fairly substantial undertaking for a Russian military which is struggling to modernise in the face of economic recession and very low oil prices.

It further illustrates how the confrontation with Turkey has become central to Putin’s campaign to force the West to recognise Russia as one of the world’s major military powers once more.

Justin Bronk is a Research Fellow in Military Sciences at the Royal United Services Institute. 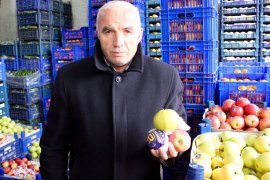 An unhappy New Year for Turkey’s exporters to Russia

Moscow’s sanctions, which officially take effect on January 1, come in response to Turkey’s downing of a Russian jet.