New England is digging out of its first big snowfall of the year, as forecasters eye another potential winter storm early next week.

An offshore weather system moved back into New England on Friday, bringing rain into the Northeast. A cold northwesterly wind then undercut the rain, producing an inevitable result: it started to snow.

Friday’s storm brought wet, heavy snow, the sort that brings down power lines and trees. The weight of this snow, by early Saturday, had caused multiple power cuts. Uutility companies reported about 20,000 outages in Connecticut, 21,000 customers without electricity in Rhode Island and about 80,000 in Massachusetts .

With the cold wind gusting regularly to near 50kms per hour, driving conditions were poor and often dangerous.The storm caused numerous accidents across the region.

This visit of winter to New England was quite a shock, because of the prevailing spring-like warmth beforehand. The change was first felt in Buffalo, upstate New York. On Wednesday it was a balmy 16 Celsius; less than 24 hours later it was 3C and snowing.

The real depth of snow was restricted to New Jersey, New York City and Long Island, Connecticut, Rhode Island, and New Hampshire. New York’s JFK Airport was smothered in 10cm of snow whilst the wind gave a chill factor down to -8C. The day before it had been 13C. Windsor Locks, Connecticut sat under 13cm of snow on Saturday morning.

New Hampshire will be the focus of the “First in the Nation” primary election on Tuesday, but it is currently the focus of snow. Dawn broke on Saturday with a good part of New Hampshire under 15cm of snow and with a temperature of -8C.

New England is due for more snow this coming week, followed by a deep chill, as another flood of cold air leaks out of the Canadian arctic. 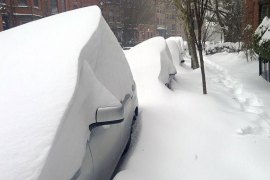 New York escaped the worst of the weather but Massachusetts was not so fortunate.