Indian authorities have suspended two policemen and made several arrests over a mob attack on a Tanzanian student in Bangalore in a case that has caused national embarrassment.

A mob attacked the 21-year-old woman as she drove with friends in the southern city in Karnataka state on Sunday night, beating her, tearing off her shirt and setting the car ablaze.

Nine people have now been arrested over the assault, which came in apparent revenge for a fatal road accident in which a Sudanese man had allegedly run over a woman less than an hour before.

“We have arrested four more persons on Thursday night in the assault case of Tanzanian woman, taking the total to nine, including five on Thursday morning,” NS Megharikh, Bangalore police commissioner, said on Friday.

Call it what it is. A racist attack. Not a case of "road rage" https://t.co/UhzubxqgMz

Two police officers who were at the scene were suspended for failing to stop the mob from attacking the foreigners and for not registering a complaint, the commissioner said.

The management student said in a complaint lodged with police on Wednesday that the rioting mob attacked her car as they drove near the scene of the road accident less than an hour later.

“Our car was set ablaze. They tugged at my T-shirt and it tore, leaving me without anything. They continued to thrash us and we ran for our lives,” she was quoted as saying in her complaint by The Times of India.

Police have come under fire for allegedly failing to stop the attack after the student said she pleaded with an officer for help, stressing that she was Tanzanian and knew nothing of the accident.

“He told us, ‘You all look alike and should get the black man who ran over a woman in the area’,” she alleged in her complaint.

Speaking to the Indian Express newspaper, John Kijazi, Tanzania’s high commissioner to India, said: “According to my view, she was attacked because she was black, just like the person who was driving the vehicle and caused the accident.

Kijazi said: “She was attacked because of her skin colour. The accident happened at a spot, and the woman was not there at that spot and was some distance away. She was not involved at all.”

The student “was getting threatening messages for two days”, along with other friends, he told the Indian Express.

“She is traumatised. We are in touch with her and other students. She said she felt like in hell. Right now, she is stable, but shocked along with the others.”

Local authorities in Karnataka, which is ruled by the Congress Party, have dismissed claims that the attack was racially motivated, describing it as a case of “mistaken identity”.

G Parameshwara, Karnataka’s home minister, denied that the student was stripped and paraded naked as alleged.

“I met the victim personally to boost her self-confidence. I assured her that she would get justice,” he said, adding that the probe has been handed over to the Central Crime Branch.

The Indian government is reported to have asked for a “detailed report” from the Karnataka government on the incident, which Sushma Swaraj, India’s foreign minister, has described as “shameful”.

I have asked the Chief Minister to ensure safety and security of all foreign students and stringent punishment for the guilty.

Vikas Swarup, spokesman for India’s external affairs ministry, said: “We have assured our African friends that necessary legal action will be taken and stringent punishment will be given to those involved in the attack and that we will take all steps to ensure the safety and security of African students in India.”

In 2014 in New Delhi, a mob attacked three African men in a metro station for apparently harassing local women, in what was suspected to be a racially motivated incident.

Delhi’s former law minister was also accused in 2014 of harassing African women after he led a vigilante mob through an area of the capital, accusing the women of being prostitutes. 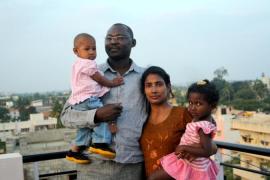 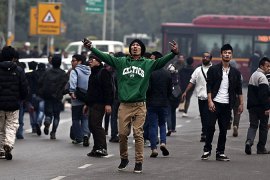