Fighters from the Islamic State of Iraq and the Levant (ISIL) continued their counterattack against Iraqi forces in Ramadi, killing at least 13 soldiers in fresh shelling on Wednesday.

Weeks after the Iraqi government declared that Anbar’s provincial capital had been recaptured from ISIL, the armed group attacked Iraqi Security Forces (ISF) positions in the north and east of the city.

In the eastern suburb of Shujirayah, where ISF troops have attempted to clear about 300 ISIL fighters, at least nine soldiers from the army’s 8th Division were killed by shelling, military sources told Al Jazeera.

The shelling came a day after an ISIL suicide car bomber killed at least 18 Iraqi soldiers in an attack in the town of Al-Bu Dhiaab, just a few kilometres north of the city centre.

The Iraqi army declared Ramadi liberated in late December after a major offensive reclaimed government offices in the city centre.

Shujirayah is considered one of the last strongholds for ISIL fighters in the city, and Iraqi forces are conducting door-to-door operations, trying to clear the 300 fighters believed to be holed up there. 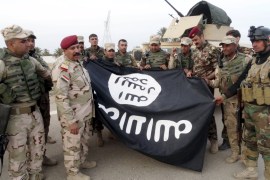