The UN chief says a shaky ceasefire in Syria is holding “by and large” on its third day, despite scattered fighting and growing accusations of violations.

However, a war of words between the Syrian government and Saudi Arabia, a key backer of the opposition, has added to rising tensions.

Speaking in Geneva, Ban Ki-moon, the UN secretary-general, confirmed receiving a letter from the High Negotiations Committee (HNC), the main umbrella opposition group, complaining of continuing violations by the Syrian government and its Russian and Iranian backers.

The letter, sent on Sunday, urged the UN to help to “specify the territory covered by the truce to prevent hostilities”.

READ MORE: What you need to know about the ceasefire in Syria?

The opposition reported air raids on several parts of northern Syria and warned that continued violations would jeopardise the planned resumption of UN-brokered peace talks in Geneva on March 7.

Riad Hijab, who heads the HNC, said in the statement to Ban that Russian, Iranian and government forces have not stopped hostilities since the ceasefire went into effect.

He said there had been 24 instances of shelling and five of ground attacks.

He said Russian warplanes carried out 26 air strikes on Sunday alone, targeting rebels that are abiding by the truce.

Violations from all sides

Al Jazeera’s Omar al-Saleh, reporting from Gaziantep near Turkey’s border with Syria, said: “By our own accounts, in the last three days of the truce including today there have been at least 60 violations from all sides, including the Syrian government, the opposition and the Russians.

“When you compare that to the level of violence before the truce, it has dramatically decreased.

“That’s why you hear Ban Ki-moon saying that the truce is largely holding. But what’s worrying is that senior members of the Syrian opposition are warning that if these violations continue … the truce could really collapse.”

The Syrian foreign ministry said recent statements by Adel al-Jubeir, Saudi foreign minister, were “lies meant to boost the morale” of fighters who have suffered setbacks in Syria in recent weeks and demonstrate the kingdom’s “destructive role” in Syria.

He also accused Syrian forces of violating the ceasefire.

The Russian- and US-brokered ceasefire that went into effect on Saturday excludes the Islamic State of Iraq and the Levant (ISIL) group as well as al-Qaeda’s branch in Syria, al-Nusra Front.

The French foreign minister on Monday called for a meeting “without delay” of a taskforce to monitor the cessation of hostilities.

Jean-Marc Ayrault spoke shortly before addressing a meeting of the Human Rights Council in Geneva.

Staffan de Mistura, the UN envoy to Syria, has planned a meeting of the taskforce, led by the US and Russia, for later in the day.

Ban said he wanted the ceasefire extended beyond the planned duration of two weeks.

The UN also said it plans to deliver life-saving humanitarian assistance to about 154,000 people living in besieged locations inside Syria over the next five days.

A briefing note sent out by the UN’s Office for the Coordination of Humanitarian Affairs (OCHA) on Monday said the assistance will include food, water and sanitation supplies, as well as non-food items and medicine.

An official with the Syrian Arab Red Crescent said dozens of trucks carrying aid started entering a besieged rebel-held suburb of the Syrian capital, Damascus, for the first time since the ceasefire went into effect.

Muhannad al-Assadi said that the 51 trucks were carrying domestic supplies such as blankets, soap and diapers. He said it was the third aid convoy that has been allowed to enter Moadamiya in recent weeks.

Aid deliveries are a main opposition demand in advance of the planned peace talks.

An attempt to restart talks collapsed earlier this month over escalating violence, including a Russian-backed government offensive in Aleppo.

Fighting in the province continued on Monday, with Syrian state media reporting that troops and other pro-government forces have opened the road linking the northern city of Aleppo with central and western Syria after it was cut by ISIL last week.

For its part, Lebanon’s Hezbollah group said it had recovered the body of a senior commander, Ali Fayyad, who was killed during fighting in the region.

The Shia group fighting alongside Assad’s forces in Syria said the body of the commander, locally known as Haj Alaa, was recovered on Sunday night in an operation in which Syrian and Hezbollah special forces took part.

Fayyad was a Hezbollah veteran who had led major battles against the Israeli army in south Lebanon.

In the central province of Hama, warplanes carried out repeated attacks on the village of Harebnafsah amid fighting between the army and rebels, according to the UK-based Syrian Observatory for Human Rights (SOHR) and the Local Coordination Committees (LCC), both opposition monitoring groups.

The LCC said the warplanes were Russian. It was not immediately clear which rebel groups were taking part in the fighting.

The SOHR reported that government forces captured an area near the Damascus suburb of Harasta after a day of fighting with fighters, including al-Nusra Front.

The war in Syria has claimed 270,000 lives and displaced more than half the population. 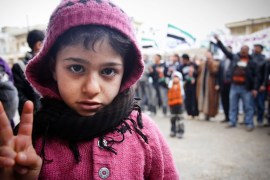 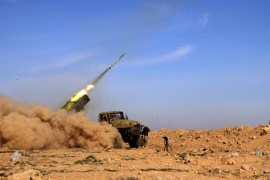 Will a ceasefire in Syria hold?

Damascus has accepted the Russian-US cessation of hostilities plan, but insists it will continue to fight “terrorism”. 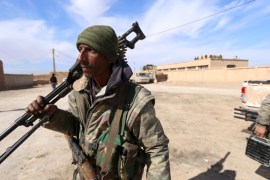