Special forces on Tuesday retook the Benghazi area of Lithi, which had been a stronghold for armed groups including the Islamic State of Iraq and the Levant (ISIL) group, after days of fierce clashes.

Residents celebrated alongside loyalist fighters in streets retaken from fighters, flashing victory signs next to the bombed-out shells of buildings

I get to spend the night at home, #HomeSweetHome I've dreamt about this for two years #Benghazi stay safe people don't touch strange objects

Some even tried to enter Lithi to reach their homes but were prevented by security forces who said they needed more time to mop up the district, an AFP reporter said.

The advance came as Libya’s parliament again failed on Tuesday to vote on a United Nations-backed unity government seen as a crucial step in ending years of political chaos and conflict in the North African state.

The administration, now exiled in the eastern town of Tobruk, failed to hold a vote of confidence because it lacked a quorum.

“The required quorum [89 members of parliament] was not reached, so the president of the chamber adjourned the session,” said MP Mohamed al-Abbani.

Another parliamentarian, Ali Al-Qaidi, confirmed that “the necessary quorum was not reached, and the session for the vote was adjourned until next week”.

UN envoy Martin Kobler voiced his disappointment at the postponement.

“Concerned by slowness of [the political] process in Libya, overtaken by military events, must speed up to stop Daesh expansion,” Kobler tweeted, using the Arabic acronym for ISIL.

Libya has had rival administrations since the summer of 2014 when the government fled Tripoli after a militia alliance overran the capital.

The conflict, which has helped to create a surge in refugees fleeing the country, has alarmed Western governments over the prospect of groups including ISIL establishing a bridgehead just 300 kilometres from Europe.

Italy said on Tuesday that it had given the United States permission to use an airbase in Sicily to launch drone strikes against ISIL in Libya.

On Friday, US jets flying from a Royal Air Force base in Britain attacked an ISIL training camp in the western city of Sabratha, killing more than 40 people including two Serbian diplomats being held hostage. 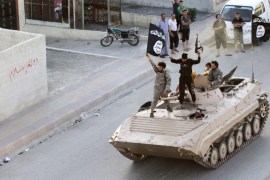 Number of fighters has reportedly dropped in Iraq and Syria while gaining “more ground and influence” in Libya.