Indian police said they have arrested two students wanted in a sedition case that has sparked major protests. The students gave themselves up after nearly two weeks on the run.

Umar Khalid and Anirban Bhattacharya surrendered to police at midnight on Tuesday after a court refused to grant them protection from arrest over a rally at their university where a group allegedly shouted anti-India slogans.

Student union leader Kanhaiya Kumar was arrested earlier this month over the rally, in a case that brought thousands of students and teachers out on to the streets to protest at what they say is an official clampdown on dissent.

Delhi police spokesman Rajan Bhagat pledged to protect Khalid and Bhattacharya after Kumar was assaulted by right-wing lawyers when he appeared in court for a preliminary hearing last week in an apparently orchestrated attack.

“They will be produced in the court today. We will ensure their security,” he said of the students, who are both in their 20s.

Khalid’s lawyer Kamini Jaiswal told the AFP news agency the two men had decided to cooperate with police, who had issued a wanted notice for them at the time of Kumar’s arrest on February 12 and alerted airports to stop them travelling abroad.

They are accused of involvement in a rally held at the prestigious Jawaharlal Nehru University in New Delhi to mark the anniversary of the execution of Afzal Guru, a Kashmiri separatist.

The two students have said they went into hiding out of fear for their safety following the attack on Kumar, but were ready to face justice.

Another three students from the university, who face the same charge but were not placed on the police wanted list, remain on the campus where they are protected from arrest because police are not allowed to enter without permission from university authorities.

A student leader who asked not to be named said the three were in contact with police and prepared to cooperate in their investigations.

The case has caused outrage at both ends of the political spectrum. Liberals accuse the ruling Bharatiya Janata Party party of stifling free speech, but Modi’s ministers have stood firm and warned of tough action against anyone engaging in “anti-national” behaviour.

Last week, as thousands of students marched through Delhi to protest about Kumar’s treatment, the government asked all major public universities to display the Indian flag.

India’s parliament was due to discuss the row on Wednesday after opposition parties demanded a debate on the issue.

The left-leaning Congress party, which governed India until they were ousted by the BJP in a 2014 election, has been particularly vocal in its support of the students. 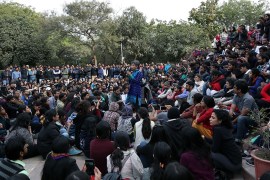 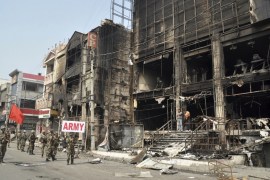