The US and Russia have agreed on a “cessation of hostilities” between the Syrian government and groups fighting it in a deal that excludes the Islamic State of Iraq and the Levant (ISIL) group and the al-Nusra Front.

The agreement on Monday called on all sides to sign up to the agreement by midday on February 26 and to stop fighting by midnight.

ISIL and the al-Nusra Front were not included because they are listed as terrorist groups by the UN Security Council.

READ MORE: The official terms for the cessation of hostilities

Al Jazeera’s diplomatic editor James Bays, reporting from New York, said some critics believed the timing of the deal would allow different sides in the conflict to push for more territory in the lead-up to the truce on Friday.

“Given everything that is happening in Syria, there is not a great deal of optimism about the proposed cessation of hostilities, particularly as many observers fear there will be an increase in the violence – with the warring sides trying to make gains in the days before it is due to start,” he said.

The Syrian Opposition High Negotiations Committee (HNC), the major opposition bloc involved in negotiations, said it would accept the terms of the deal but it did not believe that Syrian President Bashar al-Assad’s regime and its allies would do the same.

“[HNC coordinator Riad Hijab] said he does not expect the Assad regime Russia and Iran to cease hostilities due to their realisation that the regime’s survival depends on the continuation of its campaign of oppression killing and forced displacement,” the HNC said in a statement.

“Therefore the regime and its allies will continue to derail the political process and evade the inevitable.”

A joint US-Russian statement, which they made as co-chairs of the International Syria Support Group (ISSG), said the group would work to “develop procedures” to ensure those abiding by the deal were not attacked by Russian armed forces or a US-led coalition, both of which are carrying out air strikes in the country.

“The United States and the Russian Federation together call upon all Syrian parties, regional states and others in the international community to support the immediate cessation of violence and bloodshed in Syria,” the statement said.

UN Secretary-General Ban Ki-moon welcomed the deal and said he hoped the move would be the first step towards an enduring ceasefire.

The development could pave the way for further talks and a ceasefire between some rebels and Assad’s government.

“Diplomats tell me if that cessation holds – and that is a very big if – peace talks which collapsed last month in Geneva could be reconvened in about seven days,” Bays said.

Al Jazeera’s senior political analyst, Marwan Bishara, said the move reflected a determination on the part of the Russians and the US to force a change on the ground in Syria.

“There is a will now on the part of the Russians and the Americans to move forward on this … I think the Americans are quite fed up and they really wanted something a couple of weeks ago,” Bishara said.

“Moscow is running out of targets in Syria and it knows all too well it cannot continue with the same old game that started on September 30 without any concrete results. Whether it [the deal] works or not on the ground by the end of the month remains to be seen.”

Most rebel factions involved in the Geneva peace process are likely to abide by the deal and it is probable that Russian pressure will force Assad to comply also, Bishara said.

Syria’s civil war started five years ago when initially peaceful protests against Assad’s rule gave way to a war that has killed at least 250,000 people and forced millions from the country. 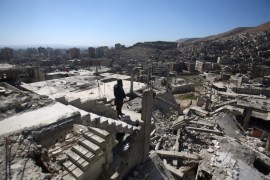 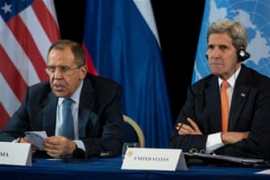 US and Russia publish terms on how the cessation of hostilities in Syria would take place by February 26. 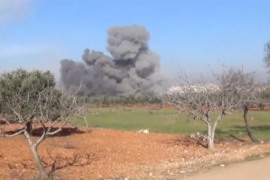