Annastiina Kallius and Babak Arzani met in a theatre group in Hungary five years ago and fell in love shortly afterwards.

The Finnish-Iranian couple, who are also activists, have been sharing a life together since, with a dream of moving to Finland when the right time comes.

“We fell in love in the backstage of the theatre production, and revealed it to the other people in the group only in the opening night,” Kallius, a 29-year-old student recruitment coordinator, says.

I have found it hard to believe that I would not be welcome back to my home country just like that. I have always taken it for granted that there is a place I belong to.

Arzani, 29, is a software engineer from Esfahan, Iran, who is also currently living in Hungary.

But their dream of moving to Finland might face a serious obstacle, if a bill drafted by the interior ministry is passed by the Finnish parliament and becomes law.

The bill, which is currently at the consultation stage, demands high levels of income for Finns and foreigners under humanitarian protection (refugees, asylum seekers and protected immigrants) holding a residence permit, who want to live in Finland with their non-EU citizen spouses and children.

“We [Annastiina and Babak] feel pressure over the issue, not only because we find the bill to be morally reproachable, but also because for our generation, employment opportunities back home in Finland are rather bleak,” Kallius told Al Jazeera.

“If I were to move to Finland, there is absolutely no guarantee I could find a job that would pay me enough to bring my partner to my country.”

The bill indicates that a citizen who wants to live with a non-EU spouse in Finland should have a monthly net income of at least 1,700 euros ($1,900).

A family of four with two children would need a net income of at least of 2,600 euros ($2900). With the high tax levels in Finland taken into consideration, this corresponds to a gross income of about 4000 euros ($4500).

“I have found it hard to believe that I would not be welcomed back to my home country just like that. I have always taken it for granted that there is a place I belong to,” says Aiski Ryökäs, 28, who has been in a relationship with her Iranian partner Behrooz Torki for four years.

Ryökäs, who lives in Hungary at the moment, points out that her profession, cultural management, is a field with low income levels. She would need to find a job with a significantly higher salary than the average in the area to be able to return to Finland with her future husband.

“With this bill I would be welcome to Finland only conditionally, with a well-paid job, because I made the costly mistake of falling in love with a foreigner,” Ryökäs told Al Jazeera.

“The bill basically bans the right for family life to poorer families – the vast majority of Finnish families – with cross-cultural background  … It just breaks families and, therefore, lives,” she said.

The Finland branch of Amnesty International, the UK-based human rights group, has been actively campaigning against the bill.

The group launched a petition against the bill called “I miss my mom!“, putting stress on the how the new practice would break families if it became law.

“The proposed income requirements are unreasonable and would be too harsh even for many Finns. We see the current proposal as discriminatory and inhumane, as well as a form of simply utterly unreasonable refugee policy,” Mikko Aarnio, the legal adviser to Amnesty, told Al Jazeera.

Current income requirements for family reunification do not concern anyone with a residence permit based on international humanitarian protection (refugees, asylum seekers and protected immigrants).

However, if the bill is passed, those who are granted humanitarian protection status would also be affected. They will have to apply to bring their families within three months after receiving their residence permits.

We see the current proposal as discriminatory and inhumane, as well as a form of simply utterly unreasonable refugee policy.

“Amnesty sees family reunification as one of the safe, controlled and favourable means of helping those most in need of international protection,” Aarnio said.

“The Finnish government is talking a lot about the need to help the integration of refugees to the society, but just how is integration made easier by preventing the enjoyment of normal family life and close relationships with the nearest and dearest.”

Uproar over the bill is growing with more pressure on the ministry to amend it, particularly towards the elements affecting Finnish citizens.

Even The Finns, the country’s anti-immigration far-right party, opposes the bill in its current state.

“The income limit is unnecessary for Finns. They do not represent the original intention, which has been to eliminate pull factors specifically with respect to asylum seekers,” Sampo Terho, the party’s parliamentary chairman, said.

If the bill becomes a law at its current state, there will be stricter requirements for Finns married to non-EU citizens who want to settle their families in Finland, than residents with international humanitarian protection, as they can apply to do so within three months.

“Finnish citizens have previously been the exception in the law because the income requirements have not been applied to them. This is the approach we took in the preparatory work, but we’ll see how we’ll move forward,” Riitta Koponen, a legislative adviser at the interior ministry, was quoted as saying by Finnish media. 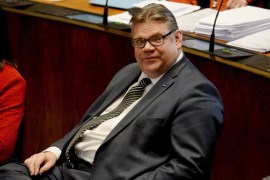 Momentum of xenophobic right in Finland

Finnish far-right stokes up ‘othering’ and bigotry for votes. 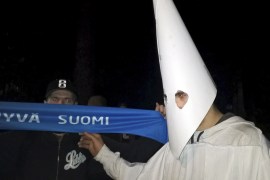 Dozens of protesters hurl rocks and fireworks at a bus carrying refugees arriving at a reception centre in Lahti. 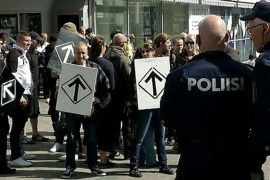 Small rally in town of Jyvaskyla ends in violence as demonstrators manhandle bystanders and scuffle with police.