Fighters from the Islamic State of Iraq and the Levant (ISIL) group have killed 18 Iraqi soldiers in a suicide car attack north of Ramadi, continuing their counterattack after being driven from the city by Iraqi troops last month.

Three ISIL suicide bombers attempted to attack members of the 39th brigade of the 10th army division, but two of their vehicles were demolished by anti-tank missiles, the military sources said.

The third bomber, however, managed to make his way to the gate of the army’s headquarters and detonate the explosives, killing at least 18 soldiers.

Al Jazeera’s Imran Khan, reporting from Baghdad, said: “This is a major blow for the Iraqi Security Forces (ISF). The north of Ramadi was supposed to be secure.”

He said that it was too early to say that ISIL’s recent attacks against Iraqi forces around Ramadi could be labelled a “resurgence”.

“What we do know is that ISIL is able to mount attacks because they are a lot more nimble,” our correspondent said.

The Iraqi army declared Ramadi liberated in early January after a major offensive reclaimed government offices in the city centre.

Elsewhere, in Ramadi’s eastern Shujirayah neighbourhood, Iraqi forces were attempting to clear about 300 ISIL fighters believed to be holed up there.

“This is the fourth time Iraqi forces have mounted an offensive to take these eastern neighbourhoods, the last remaining pocket of ISIL fighters,” Al Jazeera’s Khan said.

He said booby traps set by ISIL have so far slowed the advance.

Tens of thousands of trapped Iraqi civilians are running out of food and medicine in the western city of Falluja, an ISIL stronghold under siege by security forces, according to local officials and residents.

The Iraqi army, police and Iranian-backed Shia militias – backed by air strikes from a US-led coalition – imposed a near total siege late last year on Falluja, located 50 km west of Baghdad in the Euphrates river valley.

The city’s population is suffering from a shortage of food, medicine and fuel, residents and officials told the Reuters news agency by phone, and media reports said several people had died due to starvation and poor medical care. Insecurity and poor communications inside the city make those reports difficult to verify.

Sohaib al-Rawi, the governor of Anbar province where Falluja is located, appealed to the coalition to air-drop humanitarian supplies to the trapped civilians. He said this was the only way to deliver aid after ISIL mined the entrances to the city and stopped people leaving.

“No force can enter and secure (the delivery) … There is no option but for airplanes to transport aid,” he said in an interview with al-Hadath TV late on Monday, adding the situation was deteriorating by the day. 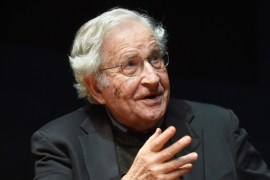 Noam Chomsky on the war against ISIL

We speak to the renowned US academic, and look at the state of Egypt five years after the Arab Spring