Kathmandu, Nepal – Nepal’s prime minister has begun a six-day state visit to India after months of bitter relations between the two neighbours.

Experts say the visit from Friday – the first foreign trip by Khadga Prasad Sharma Oli as prime minister – indicates that relations between the two nations are getting back on track.

Relations deteriorated after India asked Nepal to amend the constitution adopted last September to address the grievances of historically marginalised groups such as Madhesis.

“This is a kind of goodwill visit. The distrust that was generated should be removed. That should be the objective of the prime minister’s visit,” Lokraj Baral, a former ambassador to India, told Al Jazeera.

The visit comes a week after a blockade of nearly five months on the India-Nepal border was lifted.

The trade stoppage resulted in a severe shortage of fuel and essential supplies.

The landlocked Himalayan nation almost entirely depends on India for fuel and other essential items such as medicines.

Nepal accused India of interfering in its internal matters and imposing an unofficial blockade – a charge India has denied.

Anti-India and anti-Madhesi sentiment runs high in Nepal as India backed the demands of the Madhesi people, who say the new charter does not address their political and economic marginalisation.

The current coalition government, led by Oli’s Communist Party of Nepal, passed amendments that they said would address the demands of the Madhesi, who share close cultural and familial bonds with people across the border in India.

Oli, who earlier took strident positions against India, has said he would like to improve bilateral relations between the two neighbours.

He will meet his Indian counterpart Narendra Modi on February 20 but analysts say that no big ticket announcement is going to be made.

“He is not going to sign anything this time because this is not the correct time to do so. Agreements can only be reached on some positive things such as developmental things,” Baral, the former diplomat, told Al Jazeera.

Prashant Jha, a senior journalist based in New Delhi, told Al Jazeera: “The anti-Indian rhetoric of the Nepali politicians is hypocritical.”

He said “the two countries were taking steps to normalise relations in the past two months”.

“What we have seen in the last two months is that steps were being taken to slowly restore the…relationship. Kathmandu took the first step – the foreign minister [Kamal Thapa] came twice to New Delhi with proposals to address the political problems,” said Jha, who has covered Nepali politics for more than a decade.

“I think the PM’s visit definitely indicates that bilateral relations are getting back on track.”

Jha said the diplomatic rapprochement is still fragile as the political issues that led to the blockade have not yet been fully addressed.

The Nepal government has committed to creating a political mechanism to solve the political problems, and if it fails to do so in the next three months then we may expect more agitation in the southern Tarai plains, he said.

Oli plans to visit Mumbai, India’s financial capital, to meet business leaders as his country is in desperate need of investment in infrastructure and the industrial sector.

However, Jha says the domestic situation is not conducive for investment in Nepal.

He said aid given by the Indian government earlier had yet to be utilised.

“There is already a $1bn line of credit announced by Modi in 2014 and another $1bn by India for quake reconstruction,” he said.

“The Nepalese state has not used the assistance that has already been promised. Either it does not have the absorptive capacity or due to institutional dysfunction and instability, they have not been able to absorb.” 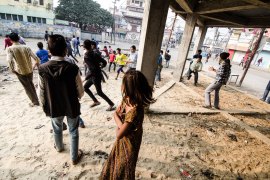 Three million Nepalese children under the age of five are at risk of death due to a shortage of fuel, food and medicine. 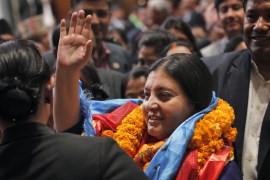