Uganda’s opposition leader has been arrested in Kampala as the country wraps up voting for the presidential election, which the opposition alleged has been rigged in favour of the incumbent Yoweri Museveni.

Our correspondent also reported witnessing a number of people jumping over from the house where the alleged fraud was committed.

But before Besigya and his supporters could enter the house, he was arrested by Ugandan police. The compound was not the residence of Besigya as reported earlier.

Voting was due to begin on Thursday at 07:00am local time (04:00 GMT), but was stalled for several hours in some polling stations in the city and surrounding Wakiso district when ballot boxes and papers did not arrive on time.Kampala traditionally shows strong support for the opposition.Veteran leader Yoweri Museveni is widely expected to win a fifth term, extending his power into a fourth decade, since he seized power in 1986. Those who want violence should play somewhere else, not Uganda.

Social media, including Facebook and Twitter, were largely inaccessible on voting day, although Internet-savvy Ugandans dodged the apparent shutdown using virtual private networks.
The government regulator, the Uganda Communications Commission, said the attempted shutdown was for “security reasons” without giving details.
Initial results are expected as early as Saturday afternoon, with the leading candidate requiring more than 50 percent of votes cast to avoid a second round run-off.

More than 15 million people are registered to vote, casting ballots in more than 28,000 polling stations for both a president and members of parliament, with 290 seats being contested by candidates from 29 political parties.

Elections in 2006 and 2011 were marred by violent and occasionally deadly street protests and a liberal use of tear gas by heavy-handed police.

IN PICTURES: Scenes from election day

But apart from an outbreak of protests when police prevented the main opposition contender Kizza Besigye from campaigning in the centre of the capital, campaigning has been mostly peaceful.

“Whoever will try to bring violence, you will see what we shall do to him. Those who want violence should play somewhere else, not Uganda,” Museveni told thousands of supporters in his final rally on Tuesday.

Some who attended that rally told Al Jazeera that they had been paid about $1 to be there. The NRM denies that it pays people to attend political events.

Besigye, a three-time loser whose brief detention by police triggered Monday’s protests in which one person was killed, said he was confident of a first-round win.

Voter turnout has followed a downward trajectory in recent elections, with nearly three-quarters of eligible voters casting a ballot in 1996, during the country’s first competitive election, but only three-fifths bothered to  turn out in 2011.

Museveni’s share of those votes has also declined but most 2016 polls give him more than the 50 percent needed to avoid a run-off. He won his last five-year term in 2011 with 68 percent.

The other main challenger, Amama Mbabazi, a former prime minister and  ruling party stalwart, has already accused the NRM of planning to stuff ballot boxes, a claim government spokesman Ofwono Opondo dismissed as the “cry of a  loser”, according to the country’s Daily Monitor newspaper.

“My main worry is the use of state machinery to support one candidate against all the laws,” Mbabazi told Al Jazeera. “And, two, the planned interference with the electoral process and the possibility of rigging.”

Besigye, too, has said he does not expect the election to be free and fair.

African Union Commission chief Nkosazana Dlamini-Zuma on Wednesday called  for “peace and calm before, during and after” the polls. 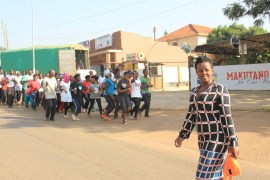 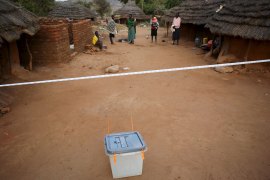 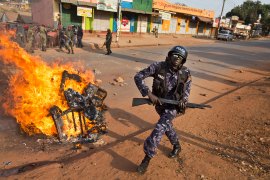