Pope Francis is set to complete his tour of Mexico with a visit to a city once synonymous with the country’s drug war.

Local security officials hope the pontiff’s visit to Ciudad Juarez on the country’s border with the US on Wednesday will help to heal the wounds left by drug violence, which left more than 10,000 people dead.

The number of murders in the city has gone down from 3,000 in 2010 to just over 300 in 2015, but even though violence has lessened, poverty and youth unemployment remain major issues.

The Catholic church is trying to tempt young people in poorer neighbourhoods from a life of crime by offering exercise classes, among other activities.

But at least one religious leader says the government and the church are not addressing the core issues.

“These places are full of young people, young people that don’t go to school, don’t have a job, or that work in the border factories for a low wage. I think that we have a lot of work to do. Neither the church, me included, nor the government, is doing enough for them,” said Father Hugo Munoz.

As well as its association with Mexico’s drug war, the city is a staging point for migrants from across Latin America trying to reach the US.

Thousands of people have died trying to trek across the desert in an attempt to build new lives or join relatives across the border.

Pope Francis, a critic of US immigration policy, is expected to make his way to the border to offer prayers. 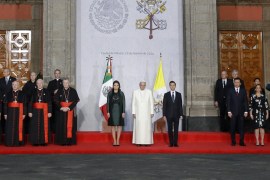 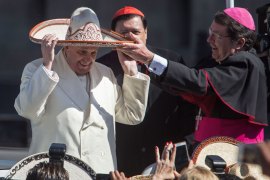 Jubilant Mexicans extend a warm welcome to pontiff in his historic trip to Mexico. 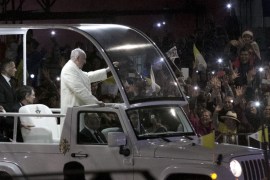 Pope Francis in visit of hope to Mexico

Francis wants to stand with victims of corruption, violence and organised crime during his five-day visit to Mexico.