Tropical Cyclone Winston continues to gain strength as it meanders towards Tonga. Meanwhile, a final warning was issued for Tropical Cyclone Tatiana as the system weakened in the Coral Sea.

Winston is currently located around 800km to the southwest of Suva, Fiji. It has sustained winds of 140km an hour with gusts as high as 165km/h.

That makes it equivalent to a Category 1 hurricane on the Saffir-Simpson Scale. The system is expected to steadily weaken over the next 12 hours, reducing its intensity to tropical storm status.

It is moving east at around 25km/h and is expected just to the north of Tonga on Thursday. By that time it is expected to re-strengthen into a Category 1 storm.

Flooding is likely as the system will bring heavy and steady rains with it, along with those increasing winds. Some parts are likely to see 150mm to 200mm of rain by the middle of the week.

Before that, there are also flood concerns for Fiji over the next 48 hours. Here a flood alert remains in force for all low-lying areas along Rakiraki river, including Rakiraki town. 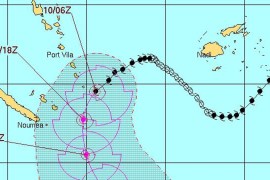 Melanesia on red alert for flooding as cyclone heads south packing wind gusts up to 260km/h. 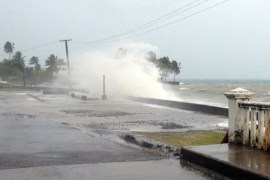