Police in New Delhi have arrested a student leader from one of India’s leading universities on sedition charges.

Kanhaiya Kumar, president of Jawaharlal Nehru University Student’s Union (JNUSU), was arrested by the police on Friday afternoon for his alleged role in “anti-India” protests, according to local news reports which were later confirmed by an Al Jazeera source at the university.

Earlier on Friday, thousands of pro-government protesters had marched in New Delhi calling for the arrest of Kumar and his allies.

The arrest reportedly stemmed from a protest on Tuesday marking the third anniversary of the state execution of Afzal Guru, a Kashmiri-born man found guilty of being involved in the 2001 attack on the Indian parliament that killed 14 people, including five attackers.

Guru was held guilty of conspiring with and sheltering the fighters who attacked the parliament – but civil rights activists said Guru did not get a fair trial.

Kumar and other supporters reportedly organised the march and pasted posters across the campus criticising the “judicial killing” of Guru, without permission from the university.

An image of the poster published online showed that the protest was also “in solidarity with the struggle of the Kashmiri people for their democratic right to self-determination”.

Kumar’s supporters, however, branded his arrest as part of a wider effort to curtail freedom of expression in the country.

“Such action is not justified,” an ally of Kumar told Al Jazeera on Friday. “The university is a place where debate and discussion are allowed. Nobody should be questioned or punished for holding a particular opinion.”

The student, who asked not to be identified for security reasons, said students and professors came out and held a march late on Friday afternoon to condemn Kumar’s arrest.

He said other student leaders and members of the academic staff were also being targeted by police, but so far no additional arrests have been reported. Protests supporting Kumar continued on Friday evening.

In a statement, M Jagadesh Kumar, vice chancellor of the Jawaharlal Nehru University, condemned the use of the educational institution “as a platform for activities that violate the constitution and the laws of the land”.

He said the protest was a work of “fringe elements” in the campus.

Kumar’s student ally, however, said that state police should not have been involved in the disciplinary process against students, adding that no violent acts had been committed during the protest.

“This is an assault on the democratic institution of the university,” he said.

“We have a culture of dissent. But there are limits. They have raised the slogan in the name of destroying India,” Sharma told Al Jazeera. “This is not acceptable at all.”

Sharma led thousands of protesters in a march through New Delhi on Friday.

He said his organisation, the All Indian Student Council, will step up pressure on police to arrest and prosecute other students involved in organising the protest.

Meanwhile, the Economic Times of India reported that S A R Geelani, a former lecturer at Delhi University, was also “booked for sedition” in connection with a separate event also marking Guru’s death.

Geelani was also charged in the 2001 parliament attack but was acquitted.

In India, dissent and pursuit of justice are anti-national activities. 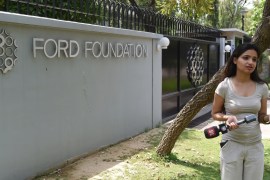