Israeli Prime Minister Benjamin Netanyahu has praised work being done to build a wall on the border with Jordan to keep out refugees, referring to Arabs living in neighbouring countries as “predators”.

“In the state of Israel as I see it, there’ll be a fence around all of it. We’re surrounded by predators and we need to protect ourselves,” the Israeli leader said during a visit on Tuesday to the site of the new wall.

Construction of the 30km wall was announced in September 2015 following calls from some Israeli politicians to take in Syrian refugees.

Another wall was built in the Israeli-occupied Golan Heights, officially considered to be territory belonging to Syria which Israel took over in 1967.

Perhaps the most notorious of Israel’s walls built for “security purposes” runs within the occupied West Bank.

It has been criticised for severely limiting the freedom of movement that Palestinians living in the occupied territories should be entitled to under international law. Its construction was also used to seize more territory for settlements.

“We are preparing a multi-year plan to encircle Israel with fences to defend ourselves in the Middle East as it is now and as it is expected to be,” Netanyahu said, according to a translation posted on his spokesperson’s Twitter page. 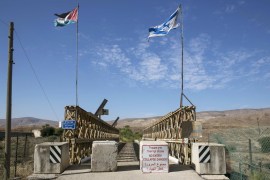 Israel to build fence to keep refugees out

Netanyahu says he will not allow Israel to be “submerged by a wave of illegal migrants and terrorist activists”.