Four months after a suicide attack on a hospital in Pakistan’s Balochistan province which killed 70 lawyers, ordinary people are struggling to find representation and justice in an unstable region.

At least 70 lawyers were killed on August 8 when a suicide bomber attacked the emergency ward of a hospital in the state capital, Quetta, where lawyers had gathered to mourn the murder of a colleague, Bilal Anwar Kasi.

Kasi, the president of the Balochistan Bar Association, had been shot dead earlier that morning.

Atta Khan Kakar, a lawyer in Quetta and Kasi’s brother, told Al Jazeera on Thursday that people in the state were still battling to come to terms with the attack that decimated the legal fraternity in Quetta. He described the incident as an irreparable blow to Balochistan’s future.

“The blast has set back Balochistan by 100 years. Lawyers with decades of experience, people who would become judges, were all killed. We are a target because we stand to provide justice,” Kakar said.

Al Jazeera’s Osama bin Javaid, reporting from Quetta, said ordinary people in the state have long complained of corruption and of a lack of trust in the judicial system. People there told Javaid that lawyers switch sides if offered a better deal in addition to the long wait for cases to be heard.

“The shortage of lawyers has only made matters worse,” he said.

One woman told Al Jazeera that her daughter had been kidnapped two years ago by her former husband. She said the lack of legal infrastructure meant that case was fraught with endless delays.

“I live with my mother far away from the court. It’s not easy for me to come to every hearing. I want my daughter,” said the woman, who would only identify herself as Urbila.

“She is sick and living with her stepmother.”

Another complainant, Abdul Haq Kakar, a former train driver in Quetta, said he was still struggling to secure his retirement fund. “There is no justice in our system,” he said of the legal difficulties faced in resolving his case.

Quetta has been hit by a series of attacks over the past few months. In October, a police training college in the city was attacked, leaving at least 61 people dead and 170 others wounded.

Both the Islamic State of Iraq and the Levant (ISIL, also known as ISIS) and a faction belonging to the Pakistan Taliban claimed responsibility for the attack on the lawyers in August.

Balochistan borders Iran and Afghanistan and has oil and gas resources. It remains afflicted by fighting, violence between Sunni and Shia Muslims, and a separatist rebellion. 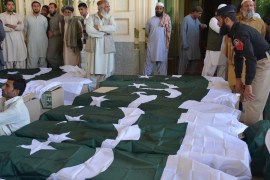 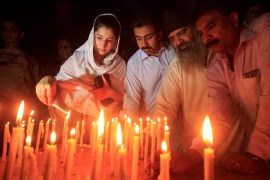