The parliamentary vote passed with a majority of more than two-thirds on Friday: 234 for and 56 against.

In a televised statement aired shortly after news of the vote broke, Park apologised for the political “chaos” in the country and urged the government to remain vigilant on the economy and national security.

“I’m so sorry for all South Koreans that I created chaos with my carelessness when our country faces so many difficulties, from the economy to national defence,” she said.

She now faces the prospect of going down in history as the first democratically elected South Korean president to be removed from office.

Al Jazeera’s Harry Fawcett, reporting from the National Assembly in Seoul, said cheers from protesters who had gathered outside echoed through the building as the motion came through.

“This is a big vindication of the impeachment motion,” he added.

“It sends, as the opposition wanted, a strong signal of the will of the national assembly as we go to the next stage of this process.”

South Korea’s Constitutional Court now has six months to decide whether to uphold the motion and remove Park from office or reject it and reinstate her.

Prime Minister Hwang Kyo-ahn, who holds what is largely a ceremonial role, will serve as acting president until the court delivers a ruling.

While the court reviews her case, Park will keep her title as President, continue to stay at the presidential Blue House, use her official car and plane, and collect the same monthly salary, according to an AP news agency report.

Bong Youngshik, the director of the Foreign Policy studies programme at the Asan Institute for Policy Studies, told Al Jazeera there was no guarantee Park would be permanently removed from office.

“We have to remain cautious, [following] a 2004 impeachment case against former President Roh Moo-hyun which the Constitutional court rejected. The impeachment against President Park should be based upon concrete evidence and a ‘serious breach of the constitution and law’. Nothing is settled yet.”

Friday’s vote marks a startling fall from grace for a politician who had run on a platform of being incorruptible, declaring herself “married to the nation”.

Park had previously rejected calls to resign and dismissed prosecutors’ claims that she colluded with a longtime confidante to manipulate government affairs and extort businesses.

The confidante, Choi Soon-sil, the daughter of a cult leader who mentored Park before his death, has been indicted on a string of charges including abuse of authority and attempted fraud.

The impeachment motion had accused Park of constitutional and criminal violations ranging from a failure to protect people’s lives to bribery and abuse of power.

The push for impeachment was driven by massive protests that have seen millions take to the streets of Seoul and other cities in recent weeks demanding the ousting of Park.

Reportedly supported by all 171 opposition and independent politicians, its adoption was made possible by an anti-Park faction within the president’s Saenuri party.

The entire opposition had threatened to resign their seats immediately if the motion was defeated, taking responsibility for their inability to follow through on the demands of the public.

There have been mass rallies every Saturday for the past six weeks calling for Park to quit, and according to a poll released on Friday, her approval rating stood at 5 percent.

South Korea’s economic outlook is worsening too, partly owing to the internal political uncertainty, as well as worries over the potential impact of US President-elect Donald Trump’s policies on trade and foreign affairs. 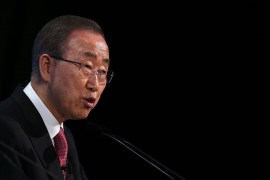 The outgoing UN secretary-general discusses the failures of the UN, Syria’s war, the Trump era and serving South Korea. 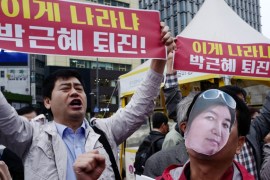