More than 400 people from Africa stormed a border fence to enter Spain’s North African enclave of Ceuta from Morocco in one of the biggest illegal crossing attempts in recent years at the frontier.

Jose Antonio Nieto, the Spanish interior secretary for security, said about 800 people had tried to get over the fence in the early morning crossing on Friday, and 438 succeeded.

He said 49 were treated in a Ceuta hospital for injuries. Two police officers were slightly injured. Nieto said some people used sticks and stones against the officers.

Walls of Shame: The Spanish-Moroccan Border

Television images showed many people celebrating and giving victory signs on having made it across.

It was one of the biggest mass charges in recent years on Ceuta’s border barrier, known as the “killer fence” because of the barbed and bladed wire that caps it.

“Fortunately, we did not have to regret any deaths or too many injuries this time,” Helena Maleno Garzon, a member of the Caminando Fronteras (Walking Borders) group that works with potential border violators in Morocco, told The Associated Press news agency by telephone from Tangiers city.

She said those attempting the crossing include teenagers and minors fleeing conflict in Mali, or who had lost family through the Ebola disease in Guinea.

Hundreds of sub-Saharan Africans living illegally in Morocco try to enter Ceuta and Melilla, Spain’s other North African enclave each year, hoping to get to Europe.

Both cities have six-metre border fences separating them from Morocco.

Most people who try to cross are intercepted and returned to Morocco. Those who make it over the fences are eventually repatriated or let go. 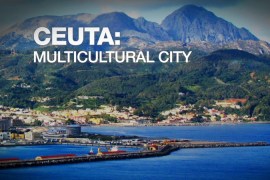 In an autonomous Spanish city on the north coast of Africa, people of four religions live together in peace. 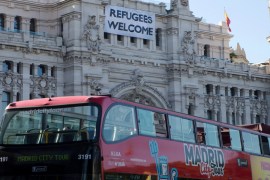 Safety for refugees in Spain – but at a cost

After fleeing war, a Somali and Syrian in Madrid describe the difficulties of starting a new life in a foreign land.