Trump, continuing to build his cabinet as he prepares to take office on January 20, said Oklahoma Attorney General Scott Pruitt, 48, would be nominated to head the Environmental Protection Agency (EPA).

Pruitt sued the EPA in a bid to undo a key regulation under outgoing President Barack Obama that would curb greenhouse gas emissions blamed for climate change, mainly from coal-fired power plants.

Pruitt was formerly head of the Republican Attorneys General Association (RAGA), the organisation dedicated to getting Republicans elected to the office of attorney general.

The New York Times reported in 2014 that the RAGA, while Pruitt headed the group, received $16m in donations from energy companies and other corporate interest groups.

Pruitt also received more than $270,000 in donations from the oil and gas industry in the past, according to the National Institute on Money in State Politics, a nonpartisan group that monitors campaign contributions.

“Mr Pruitt’s record is not only that of being a climate change denier, but also someone who has worked closely with the fossil fuel industry to make this country more dependent, not less, on fossil fuels,” said Vermont Senator Bernie Sanders.

Since becoming the top prosecutor for the major oil and gas-producing state in 2011, Pruitt, 48, has launched a number of lawsuits against regulations put forward by the agency he is now poised to lead, trying to block federal measures to reduce smog and curb toxic emissions from power plants.

He is also a leading figure in a legal effort by several states to throw out the EPA’s Clean Power Plan, the centerpiece of Obama’s climate change strategy, that requires states to curb carbon output.

In an interview with Reuters in September, Pruitt said that he sees the Clean Power Plan as a form of federal “coercion and commandeering” of energy policy and that his state should have “sovereignty to make decisions for its own markets.”

Pruitt has also said he is sceptical of climate change. In an opinion piece in an Oklahoma newspaper this year, he wrote that he believes the debate over global warming is “far from settled” and that scientists continue to disagree on the issue.

An overwhelming majority of scientists around the world say man-made emissions are warming the planet.

Trump and Branstad are expected to appear together in Iowa on Thursday.

Before that, Trump will meet some of the victims of last week’s car-and-knife attack at Ohio State University. He has denounced immigration policies that allowed the apparent attacker into the country.

Trump’s presidential campaign was in large part defined by searing rhetoric and his steadfast threats to build an impenetrable wall on the border with Mexico and crack down on undocumented immigrants living in the US.

But he struck a softer tone in an interview published on Wednesday after he was named Time Magazine’s Person of the Year.

“We’re going to work something out that’s going to make people happy and proud,” Trump said. “They got brought here at a very young age; they’ve worked here, they’ve gone to school here. Some were good students. Some have wonderful jobs. And they’re in never-never land because they don’t know what’s going to happen.”

He offered no details about a policy that would make that clear. During his campaign and after his electoral victory last month, Trump vowed to deport up to three million undocumented immigrants – more than President Barack Obama’s record high of 2.5 million deportations.

During the campaign, Trump’s tough comments – including a vow to overturn Obama’s executive orders on immigration – have led to fears among immigrant advocates that he will end Obama’s Deferred Action for Childhood Arrivals (DACA) programme.

Hundreds of thousands of young immigrants have gained work permits and temporary protection from deportation under the 2012 programme, which aides to Trump have said would be revisited.

Though some immigrant rights advocates hope Trump’s recent comments signified a shift in his plans, others were sceptical.

“We’ve seen this movie before,” Frank Sharry, of the immigrant-rights group America’s Voice, said in a statement. “Unfortunately we expect no pivot and no softening.”

Meanwhile, Trump moved towards making another addition to the collection of generals in his cabinet, settling on Kelly to head Homeland Security, according to people close to transition.

General Kelly, who joined the Marine Corps in 1970, retired this year after a final command that included oversight of the Guantanamo Bay detention centre.

He has a reputation as a border hawk after a time in the Southern Command, which is based in South Florida and regularly works with Homeland Security on missions to identify and dismantle immigrant smuggling networks. 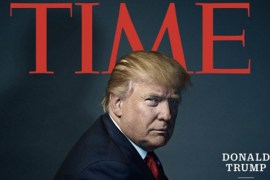 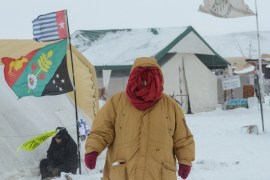 Tweet posted by US president-elect suggests a year prison sentence or loss of citizenship for burning the American flag. 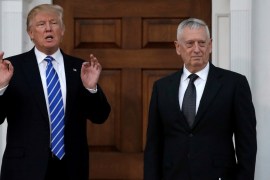