Heavy rain continues to cause flooding across southern Thailand after at least eight people lost their lives.

Much of the northern Malay Peninsula, including the far south of Myanmar and the Mergui Archipelago, has been hit by continuous rain, which began early on Friday.

Some areas have recorded up to half a metre of rain (500mm). This compares to an average rainfall for the entire month of December of 150 to 200mm.

On Sunday morning, 1,245 villages in 18 districts in southern Thailand were hit by flooding, affecting around 234,000 people.

Road and rail networks were badly affected. Southbound trains from Bangkok were halted at Thung Song in Nakhon Si Thammarat.

Heavy rain also hit the Gulf of Thailand area, and flooding on the holiday island of Koh Samui was widespread. At one point more than 90mm of rain fell in 48 hours, but the flood waters have now subsided.

The rain is the result of an area of low pressure circulating to the west of the country, above the Andaman Sea. Although not developed enough to form a full-blown tropical cyclone, the circulation has developed over the warm waters of the region.

It is likely that the low-pressure system will continue to track westwards in the coming days, bringing relief to Thailand, but posing a threat to the Andaman Islands. 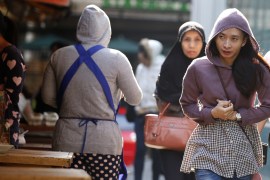